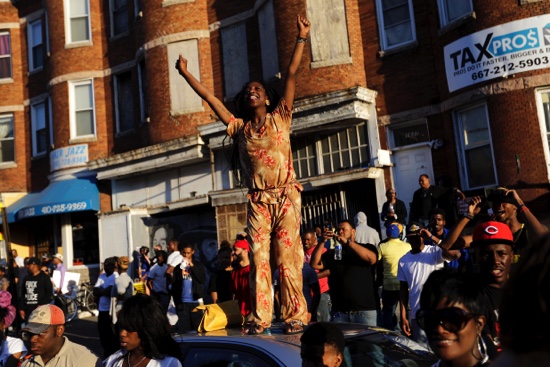 Thousands of people looked on as speakers praised the city’s young top prosecutor for quickly moving forward with charges against the police officers they see as responsible for the death of a 25-year-old black man who suffered a fatal spinal injury in their custody.
The peaceful scene Saturday on a grassy plaza across from Baltimore’s City Hall was a striking contrast to demonstrations the past two weeks at the same plaza. Crowds of angry protesters demanded that the city’s leaders heed their cries for justice, and one night, the protests gave way to looting, rioting and arson.
On Friday morning, State’s Attorney Marilyn Mosby had stood nearby before a bank of television cameras beaming her words live around the world. She announced criminal charges against the officers ranging from assault to murder in the death of Freddie Gray, whose name has become a rallying point against police brutality and socio-economic inequality in American cities.
Organizers billed the big Saturday afternoon demonstration not as a protest of Gray’s death, but a “victory rally” that city leaders have perhaps listened to their cries. Smaller groups of what looked to be several hundred gathered all around the city and made their way through the streets to join the thousands at the main rally.
Chants of “no justice, no peace, no racist police” echoed and crowds of people, black and white, young and old, carried homemade signs calling for peace, as well as printed ones asking for justice. Others wore T-shirts that read, “Black Lives Matter,” a slogan many have taken up in the fight.
The Gray case is the latest in a string of high-profile killings of black men by police that include Michael Brown in Ferguson, Missouri, and Eric Garner in New York City, neither of which resulted in charges against the lawmen.
Unlike Brown and Garner, Gray’s death happened in a majority black city where black elected officials hold the reins of political power and oversee the justice system. The police department is 48 percent black. Even the officers charged are racially split — three white, three black.
“I think it has to do with Ms. Mosby living here in West Baltimore: they took seriously the sentiment of the youth,” said Kustanya McCray, a 41-year-old Baltimore resident who joined thousands of people at the demonstration. “Our city council, the mayor — they’re all from here. They’ve lost family members to violence. They understand what’s been happening.”
After a night of rioting and looting, the National Guard was called in to help police enforce a nightly curfew with heavily armed troops riding in armored vehicles, to which many objected. As of 11 p.m. on Saturday, a handful of people had been arrested, including one that was hit with a blast of pepper spray and later taken away in an ambulance.
Mosby said in charging the officers that police had no reason to stop or chase after Gray. They falsely accused him of having an illegal switchblade when it was a legal pocketknife. The van driver and the other officers failed to strap him down with a seat belt, a direct violation of department policy, and they ignored Gray’s repeated pleas for medical attention, even rerouting the van to pick up another passenger, she said.
Mosby said Gray’s neck was broken because he was handcuffed, shackled and placed head-first into a police van, where he was left to slam against the walls of the small metal compartment. She deemed the death a homicide. Juliet Linderman and Michael Biesecker, Baltimore, AP