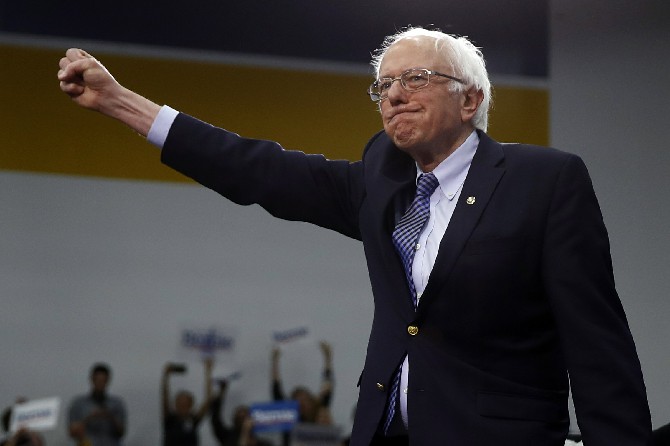 For Bernie Sanders, not all victories are created equal.
In 2016, Sanders carried New Hampshire by 22 points, pummeling Hillary Clinton and setting the stage for a protracted fight over the Democratic presidential nomination. Yesterday [Macau time], he won the state’s primary by less than 2 points, raising questions about his ability to broaden his coalition beyond his most loyal supporters.
But the Vermont senator is benefiting from a crowded and fractured primary field, with several moderate candidates dividing up the rest of the vote. Taken together, Pete Buttigieg, Amy Klobuchar and Joe Biden drew support from more than 50 percent of New Hampshire voters — twice as much as Sanders.
“It’s clear that a majority of Democrats do not want Bernie Sanders to be the nominee,” said Ben LaBolt, who advised President Barack Obama’s 2008 campaign. “But if the more pragmatic candidates do not consolidate in the weeks ahead — especially those hanging by a thread in the single digits — Sanders has a very real chance of winning the nomination.”
Sanders has energized young voters and liberals with his calls for a Medicare for All health care system and free college tuition. Yet his pricey policy proposals and his standing as a self-described democratic socialist have some in the party on edge, fearful he would struggle to defeat President Donald Trump and damage Democrats’ prospects of holding or picking up congressional seats in more moderate parts of the country.
Yet the top tier of the Democratic field shows no signs of shrinking as the primary shifts to more diverse states. And it will only get more crowded as Mike Bloomberg, who is blanketing the delegate-rich states that vote March 3 with hundreds of millions of dollars in advertisements, starts showing up on ballots.
If anything, questions about Sanders’ strength, and uncertainty about which moderate is best to take him on, seem to be giving candidates incentive to stay in as long as they have money to fund their campaigns. That fundraising challenge becomes more urgent for Biden, as well as Sen. Elizabeth Warren, a progressive candidate who finished a disappointing fourth in New Hampshire.
Though the Democratic race is in its early stages — just two states have voted and the vast majority of delegates are still in play — the primary has echoes of the 2016 Republican primary. Trump consistently won contests with about one-third of the vote, while his competitors split up the rest of the electorate.
In the 2016 New Hampshire primary, for example, Trump carried 35% of the vote, while more centrist competitors John Kasich, Jeb Bush, Marco Rubio and Chris Christie divided up more than 40% of the electorate.
Those moderate Republican moderates faced the same dilemma now in front of their Democratic counterparts: How long do they stay in the race and allow Sanders to eke out victories and potentially deepen his support?
In 2016, some of the moderate candidates hung on for weeks, laboring under the expectation that Trump’s controversial candidacy would crater and some of his support might swing their way. Instead, Trump only grew stronger.
“Winning begets momentum, which begets people wanting to be on your team,” said Matt Gorman, who worked for Bush’s campaign. “The more Trump won, the more people went over to him.”
Gorman’s advice to Sanders’ rivals? Move on quickly if you want to stop Sanders.
“For a coalescing to happen, it would need to happen immediately,” he said. AP