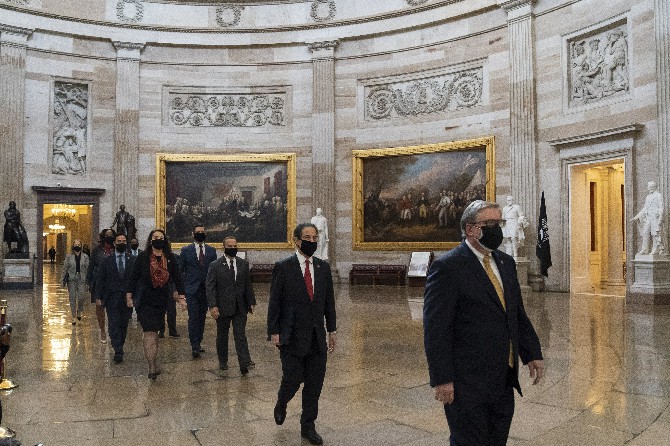 House Democrats will begin two days of arguments in Donald Trump’s second impeachment trial, trying to convince skeptical Republicans that the former president alone was responsible for inciting his mob of supporters who broke into the U.S. Capitol on Jan. 6 and interrupted the presidential electoral count.
The arguments today [Macau time] from the nine Democratic impeachment managers for the House, which impeached Trump last month, will come a day after the Senate voted to move ahead with the trial even though Republicans and Trump’s lawyers argued that it was unconstitutional because Trump had already left office. All Democrats and six Republicans disagreed, arguing that there is legal precedent for the trial and that there should be no exceptions for impeachable behavior in a president’s last months in office.
While Democrats won yesterday’s vote, it also signaled that they will not likely have the votes for an eventual conviction, since they would need a minimum of 17 Republicans to vote with them. Democrats say they know they are arguing the case uphill, but they are holding out hope that they will convert more Republicans by the final vote.
What to watch as the Democrats prosecute their case for “incitement of insurrection”:

DEVASTATING CASE AGAINST TRUMP
The Democrats are trying to take advantage of senators’ own experiences, tapping into their emotions as they describe in detail — and show on video — what happened as the mob broke through police barriers, injured law enforcement officers, ransacked the Capitol and hunted for lawmakers. Democratic aides working on the impeachment team said that they think they have a “devastating” case against the former president, and that they will prosecute it like a criminal trial.
Yesterday [Macau time], as they argued that the trial was constitutional, they strayed from their arcane arguments about historic precedent and the Federalist Papers to show a video that took senators through a visceral, graphic timeline of Jan. 6, starting with Trump’s speech to supporters in which he told them to “fight like hell” to overturn his defeat. It juxtaposed Trump’s words with what was happening inside and outside the building as supporters broke in, showing violence and jeers aimed at police and lawmakers. The carnage led to five deaths.
Similar video evidence is expected today, as they begin arguments on the merits of the case — including some that hasn’t been seen before, according to the aides, who requested anonymity to discuss the managers’ plans.

TRUMP’S TEAM GETS A REDO
Trump’s lawyers had a bad day yesterday, as Trump fumed at their performance and GOP senators leaving the trial criticized their arguments as “random,” “disorganized” and “perplexing.” Trump felt that the team, especially lead lawyer Bruce Castor, came off badly on television and looked weak compared to the Democratic prosecutors, according to a person who spoke on condition of anonymity to discuss private conversations.
On Friday, they will get another chance, starting what is likely to be two days of arguments that last into the weekend. They plan to argue that Trump did not incite the violence, that rioters acted of their own accord and that the former president is protected by freedom of speech.
While the Democrats have appealed to the senators’ emotions, Trump’s lawyers have tried to tap into raw partisan anger. David Schoen, who spoke after Castor, criticized statements from Democrats that he said were also inciting violence, and told the chamber that the Democratic prosecutors are fueled by a “hatred” of Trump and fear that they will lose power.

REPUBLICANS TO WATCH
Six Republican senators voted with Democrats not to dismiss the trial on constitutional grounds. Those senators so far appear the most likely to vote to convict Trump.
The six senators, most of whom have harshly criticized the president’s behavior, are Susan Collins of Maine, Ben Sasse of Nebraska, Mitt Romney of Utah, Lisa Murkowski of Alaska, Pat Toomey of Pennsylvania and Bill Cassidy of Louisiana.
Cassidy was the only one who did not side with Democrats in a similar vote two weeks ago. He said after the vote that he thought Democrats had a better argument and that Trump’s team had done a “terrible” job. He said he will watch the additional arguments as an impartial juror and then decide whether to convict.
Ohio Sen. Rob Portman, who voted to dismiss the trial, is retiring in 2022 and has also said he has an open mind about conviction. MARY CLARE JALONICK, WASHINGTON, AP 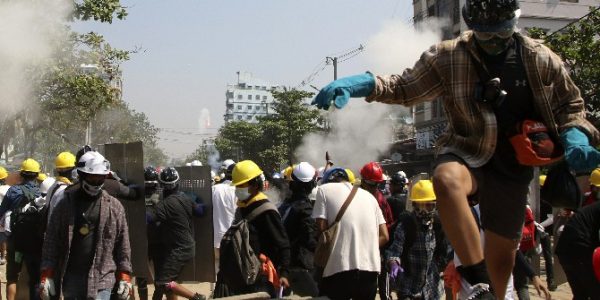