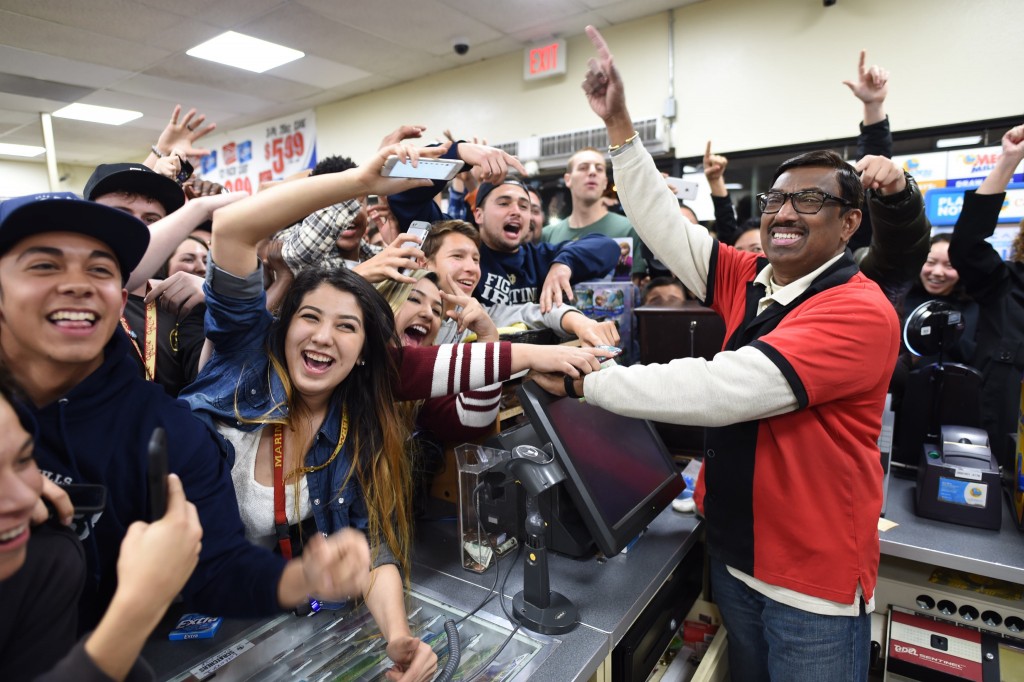 7-Eleven store clerk M. Faroqui celebrates with customers after learning the store sold a winning Powerball ticket yesterday in Chino Hills, Calif. One winning ticket was sold at the store located in suburban Los Angeles said Alex Traverso, a spokesman for California lottery. The identity of the winner is not yet known. (Will Lester/The Sun via AP)

The winners did not immediately identify themselves today (Macau time), but they bought their tickets in Munford, a town of about 6,000 in Tennessee; the modest Los Angeles suburb of Chino Hills; and at a supermarket in Melbourne Beach, Florida, where residents of a nearby housing development were heard partying loudly after Wednesday night’s drawing.

Spain’s massively popular Christmas lottery, known as “El Gordo,” is ranked as the world’s richest, though it doles out millions of prizes rather than one large jackpot like the Powerball.

The winners of the world-record Powerball jackpot overcame odds of 1 in 292.2 million to land on all the numbers: 4-8-19-27-34 and Powerball 10. They can let the jackpot be invested and thereby collect 30 annual payments totaling an estimated $533 million, or split $983.5 million in cash all at once.

The California ticket was sold at a 7-Eleven; the Florida ticket at a Publix grocery store. Tennessee officials did not immediately say which of the three Munford stores offering Powerball tickets produced the winner.

That store will get a $25,000 check; Florida’s store collects $100,000, and California lottery spokesman Alex Traverso told The Associated Press that a $1 million bonus will be shared between the Chino Hills store owner and the 7-Eleven company. The amounts that follow each state’s rules.

TV trucks from Memphis quickly arrived in Munford, where people marveled over the winning ticket and joked about what they would have done with the money.

Auto body shop worker Jerry Caudle said he was “freaking out” when he heard a winning ticket was sold in his town, but then saw that he matched only two numbers, for a prize of $14. He wore a wistful smile as he left the Munford Short Stop gas station and convenience store, which offers Tipton County’s “best chicken on a stick” for $3.69.

“It’s been tough,” Caudle said. “The hardest winter for me here in 17 years.”

The California store and its surrounding strip mall suddenly became a popular gathering spot in the rural suburb of 78,000, where cows still graze on hillsides. Hundreds of people crowded the store and spilled into its parking lot, cheering and mugging for the television cameras and chanting “Chino Hills! Chino Hills!”

Store owner Balbir Atwal worked as an electronics salesman after emigrating from India in 1981, and bought his first 7-Eleven franchise at the age of 27. Now he owns four. He said he has sold winning tickets before, but never like this one.

“Every time we say, oh, this is time,” Atwal said. “I was just joking, I said, this is the time someone’s going to hit it.”

Michael Fahim, 48, real estate broker from Chino Hills, said he bought 20 lottery tickets Wednesday night just up the street. “I’m happy it’s in Chino Hills. I think it put us on the map — all over the world,” he said, adding that his brother called from Australia overnight to learn if he won.

Some took selfies with the store clerk, who became an instant celebrity and may well have been the man who sold the ticket.

In Melbourne Beach, neighbors were gossiping that the winner might be someone in a housing development several miles from the Publix where loud partying could be heard, according to Lisa Londini, a professional caregiver who was shopping at the market Thursday.

“The winner could be as close as your neighbors!” she said, visibly excited. “I wish it was me!”