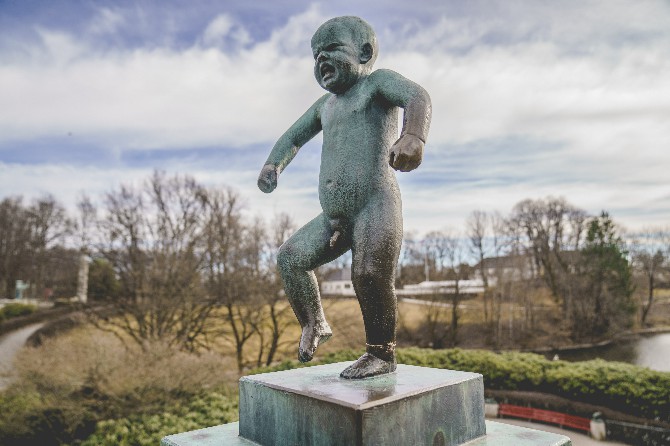 A Norwegian museum said yesterday [Macau time] that a famous statue of a baby boy stomping his feet in anger has been removed from a park in the capital, Oslo, for repairs after someone vandalized it by trying to saw off its left ankle.
The bronze Sinnataggen sculpture is considered a national treasure and is arguably the most famous work by Norwegian sculptor Gustav Vigeland, who died in 1943 and has also designed the Nobel Peace Prize medal.
It depicts a small angry boy and was most likely modeled in 1928, the Vigeland Museum said in a statement, adding that “someone tried to saw over the left ankle of the sculpture.”
The statue was removed for conservation, and will be placed back in its original place “as soon as possible”
“This is damage to a protected cultural monument and the matter will be reported to the police,” said museum director Jarle Stroemodden. “We want the audience to have close access to the art of Vigeland and it is a pity that this (has happened).”
The Sinnataggen is part of the so called Vigeland Installation — a highly popular tourist attraction in Norway — that consists of dozens of sculptures and larger structures such as bridges and fountains at the Frogner Park close to the center of Oslo. MDT/AP