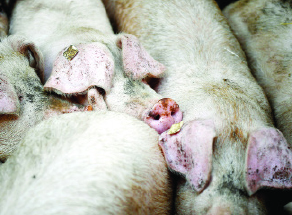 Vietnam is on high alert after African swine fever was discovered in its northern provinces.

More than 200 pigs have been slaughtered after household farms in Hung Yen and Thai Binh provinces were suspected to be contaminated, the Department of Animal Health said.

The strange thing is the affected areas are far from China – where the disease is ravaging its pork industry – raising questions of how the disease spread to the remote farms.

Tourists, often perpetrators in the spread of the disease across borders by carrying contaminated products, are one suspect, according to a posting on the department’s website Wednesday. The illegal transport, sale and consumption of smuggled pigs and pork products in Vietnam’s northern border provinces, which increased at the year-end and before the Lunar New Year, were cited by the department as another possible cause.

One other, perhaps more worrying, suggestion from the Vietnamese authorities is that migrant birds, which may have been in contact with dead infected hogs, carried the disease across its borders.

African Swine Fever is a hardy virus that can survive and remain infective for a long period of time in environment and pork products, said Pawin Padungtod, senior technical coordinator at the United Nations’ Food and Agriculture Organization’s Emergency Center for Transboundary Animal Diseases. “Experience in China suggest that the virus is mostly spread by transport vehicles and humans,” Hanoi-based Pawin said.

After the deadly virus was first detected in China in August, authorities across Asia have hunkered down to stem the spread, with border controls tightened, transport of pigs banned, and travelers caught carrying pork products slapped with fines. While farm gates and barriers may go some way to stop contamination via wild boars, the possibility that birds are spreading the disease takes the threat to the region’s pork industry to a whole new level.

One culprit for the transmission could be insects. Soft ticks, a known vector of African swine fever, are promiscuous in their host preferences and have occasionally been recovered from birds, according to a review of the virus in the Frontiers in Veterinary Science. This complicates the control and eradication of the disease, the report said.

Authorities in Vietnam’s Thai Binh and Hung Yen provinces have sterilized contaminated farms and high-risk areas, and are closely controlling the transport of pigs, pork products, the slaughter of pigs and consumption of pork products in affected areas, according to the department’s emailed statement. No new cases have been found in the two provinces since suspicions were first reported on Feb. 1, the department said.

While Vietnam’s hog figures pale in comparison to China, which is still the world’s largest pork producer with typical consumption of 700 million pigs a year, it’s still a sizable market. The smaller Asian neighbor ranks sixth globally for pork production, which last year rose 2.2 percent to 3.8 million tons, and had 27.4 million hogs in 2017, the general statistics office said.

In China, African swine fever has led to the deaths of almost 1 million pigs, with authorities struggling to control its spread across the country. Outside of China, Mongolia reported its first outbreak last month. The virus, which typically kills pigs within a few days but isn’t known to harm humans, was discovered in Russia in 2007, where nations have managed the disease through the growth of highly industrialized farms with stringent bio-security measures.  Bloomberg