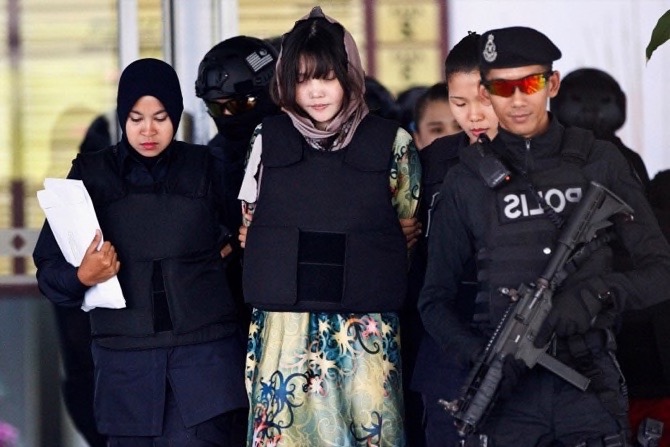 Just four days ago, the future for Indonesia’s Siti Aisyah looked bleak — she was two years into her detention in Malaysia and faced a possible death sentence if convicted of killing the half brother of North Korea’s leader. Then the charges were unexpectedly dropped.

With Aisyah safely back home in Indonesia after Monday’s surprise, the only remaining suspect facing justice in the case is Vietnam’s Doan Thi Huong. The Associated Press reports that officials in Hanoi are now refreshing calls for her freedom as well.

Vietnamese Foreign Minister Pham Binh Minh made the plea in a phone call Tuesday with his counterpart, Malaysia’s Saifuddin Abdullah, according to a statement on the ministry website. It said Minh requested the Malaysian court conduct a fair trial and free Doan Thi Huong.

Huong’s trial is to resume today, and prosecutors are expected to reply to a request by Huong’s lawyers for the government to withdraw the murder charge against her as well. Analysts say Malaysia risks creating a rift with Vietnam if it doesn’t do the same for Huong.

“Malaysia will create a thorny bilateral problem with Vietnam if there is no similar treatment,” said Bridget Welsh, a Southeast Asia expert with John Cabot University in Rome.

The two women were accused of smearing the toxic VX nerve agent on Kim’s face in an airport terminal in Kuala Lumpur on Feb. 13, 2017. They have said they thought they were taking part in a prank for a TV show. They were the only people in custody after four North Korean suspects fled the country the same morning Kim was killed.

Prosecutors did not give any reason for the remarkable retreat in their case against Aisyah, but the timing raised eyebrows in Malaysia as a High Court judge had just last August found there was enough evidence to infer that Aisyah, 26, and Huong, 29, had engaged in a “well-planned conspiracy” to kill Kim.

Analysts said Aisyah’s release was in part due to politics and the improved relations between Indonesia and Malaysia that have come since Mahathir Mohamad returned to the Malaysian premiership last year after the stunning election defeat of Najib Razak.

“One relationship that suffered under Najib was the Malaysia-Indonesia one. Mahathir knows how important good ties are and in this more open era, supporting democratic allies is essential,” Welsh said.

Indonesia assisted Malaysia last year when some of its former government officials, wanted on corruption charges, tried to seek refuge there. It also seized a luxury yacht at the center of a Malaysian corruption scandal off Bali island in cooperation with U.S. FBI and returned it to Malaysia last year.

Mahathir has said that Aisyah’s release was based on the “rule of law” amid allegations the government had interfered in the trial. Law Minister Liew Vui Keong said yesterday that the attorney- general has sole discretion in withdrawing the charge against Aisyah.

“The AG can exercise this power even during trial. The government cannot interfere with the AG’s power,” Liew was quoted as saying by English-daily The Star online.

While Aisyah’s release was partly political, the case against her was also seen as weaker as her lawyers have told the court there was no video evidence showing her accosting Kim at the airport, said Oh Ei Sun, senior fellow with Singapore’s Institute of International Affairs.

There was of Huong.

Lawyers for the women have argued all along that they were pawns in a political assassination with clear links to the North Korean Embassy in Kuala Lumpur. They say the prosecution has failed to show the women had any intention to kill. Intent to kill is crucial to a murder charge under Malaysian law.

Malaysian officials have never officially accused North Korea in the case and have made it clear they don’t want the trial politicized.

Indonesia’s government has said its continual high-level lobbying resulted in Aisyah’s release. The foreign ministry said in a statement that she was “deceived and did not realize at all that she was being manipulated by North Korean intelligence.”

It said that over the past two years, Aisyah’s plight was raised in “every bilateral Indonesia-Malaysia meeting,” including at the president’s level, the vice president’s level and in regular meetings of the foreign minister and other ministers with their Malaysian counterparts.

Huong’s lawyer, Hisyam Teh Poh Teik, said after Monday’s court session that Huong felt Aisyah’s discharge was unfair if she was still going to be held.

“She is entitled to the same kind of consideration as Aisyah,” he said.