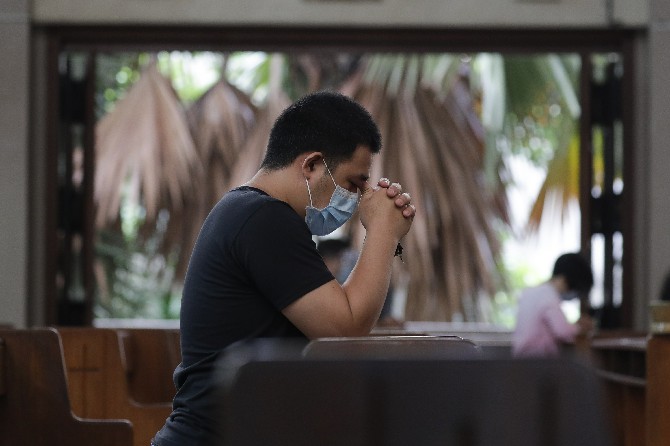 Surges of new coronavirus cases continued last weekend in India and the Philippines, which recorded another daily high to surpass 100,000 total infections, as officials across the globe considered stricter measures to stymie the spread of the pandemic.
A curfew was imposed on Australia’s second-largest city, Melbourne, following a spike in infections.
Countries including the United States, India and South Africa are struggling to rein in their first wave of infections while South Korea and others where the disease abated try to avert a second wave as curbs on travel and trade ease.
Governments worldwide have reported 684,075 deaths and 17.8 million cases, according to data gathered by Johns Hopkins University.
India’s 54,735 new cases were down from the previous day’s record 57,118 but raised the total to 1.75 million. The month of July accounted for more than 1.1 million of those cases.
The major cities of New Delhi and Mumbai might have passed their peaks, said a government expert, Randeep Guleria. Subways, cinemas and other public facilities are closed until Aug. 31.
The Philippines reported 5,032 new cases, raising its total to 103,185, with 2,059 deaths.
On Saturday, leaders of Philippine medical organizations appealed to President Rodrigo Duterte to reimpose a lockdown on the capital, Manila. They said the health system was in danger as personnel fall ill or quit due to fear or fatigue.
In Japan, the government reported 1,540 new cases, close to Friday’s record of 1,579.
The spike in infections, most of them in their 20s and 30s, prompted warnings young people were letting their guard down. Gov. Yuriko Koike of Tokyo, which has about one-third of the new infections, says she might declare an emergency to contain the outbreak.
In Florida, authorities were trying to prepare storm shelters while enforcing social distancing as Tropical Storm Isaias churned toward the heavily populated state. It was due to be near the coast early Sunday.
Florida reported 179 deaths on Saturday, raising its total to more than 7,000.
The governor warned residents to expect power outages and said they should have a week’s supply of water and food.
The United States has the world’s biggest number of confirmed cases at 4.6 million, or one-quarter of the total, and 154,361 deaths. White House coronavirus task force leader Dr. Deborah Birx said Sunday that the virus had entered a “new phase” in the U.S. as it has rapidly spread in rural and urban America.
“What we are seeing today is different from March and April. It is extraordinarily widespread,” Birx told CNN’s “State of the Union” as she urged Americans to wear face masks and observe social distancing measures.
In Australia, Premier Daniel Andrews of the southern state of Victoria announced a 8 p.m.-to-5 a.m. curfew on Melbourne, a city of 5 million people. Schools statewide are to return to home-based teaching and day care centers were closed.
Andrews said there were seven deaths and 671 new cases since Saturday.
“If we don’t make these changes, we’re not going to get through this,” Andrews said.
Also Sunday, China and South Korea reported more infections but spikes in both countries appeared to be tailing off.
China had 49 new confirmed cases, up from the previous day’s 45. Thirty were in Xinjiang in the northwest, where authorities are trying to contain an outbreak focused on the regional capital, Urumqi.
Three cases were found in students who returned from Russia to Wuhan, the southern Chinese city where the pandemic began in December. Most anti-disease controls were lifted there after the ruling Communist Party declared victory over the disease in March.
Hong Kong reported 125 new infections as authorities tried to find the source of its latest outbreak. The Chinese government said a team of seven virus testing experts was sent to the city to help.
South Korea reported 30 new cases, raising its total to 14,366 with 301 deaths, but said only eight were acquired in the country.
The government warned earlier case numbers would rise as South Koreans came home from the Middle East and other places with outbreaks. Authorities say cases from abroad are less threatening because arrivals are quarantined for two weeks.
On Saturday, the leader of a secretive Korean church was arrested in an investigation into whether the group hampered the anti-virus response after thousands of worshippers were infected in February and March.
On Saturday, South Africa reported 10,107 new cases, raising its total to 503,290.
That put the country fifth behind the United States, Brazil, Russia and India in total cases, though its population of 58 million is much smaller than theirs.
In Europe, the number of new cases reported in Italy dipped below 300 for the first time.
An employee in the Austrian chancellery tested positive for the virus but didn’t work directly with Chancellor Sebastian Kurz, the Austrian Press Agency reported. ASHOK SHARMA & JOE McDONALD, NEW DELHI, AP