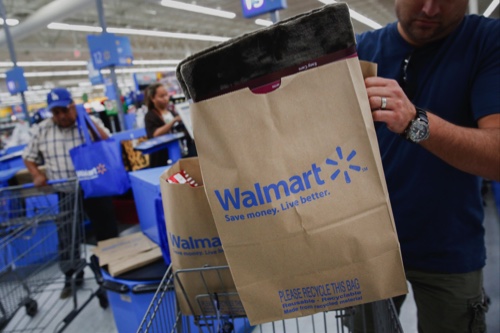 Wal-Mart Stores Inc., the world’s largest retailer, dismissed about 30 senior executives in China amid a restructuring in Asia that includes store closures in Japan and management changes in India.
The departure of the executives, including directors and more senior staff, is to streamline and simplify the business and is “consistent with actions taken over the last several months,” Ray Bracy, a spokesman for Wal-Mart in China, said Wednesday in an e-mailed reply to questions. A small number of the employees mutually agreed to leave, he said.
The move comes amid a management shakeup in the U.S., where Wal-Mart announced the departure of the company’s U.S. merchandising chief on Nov. 25. Wal-Mart also reappointed Scott Price as Asia chief this month as the retailer faces headwinds in its biggest markets in the region.
Wal-Mart, based in Bentonville, Arkansas, is encountering stiff competition in China and also dealing with food safety scandals such as fox DNA found in donkey meat. The retailer said in October 2013 it planned to add as many as 110 stores over three years in China, while shutting some outlets and remodeling dozens more as the company overhauls its business.
Among the executives dismissed are vice presidents from Wal-Mart China and Sam’s Club China, according to two Wal-Mart China employees, who asked not to be named for fear of retribution. Others were from divisions including merchandising and innovation, they said. Bracy declined to comment.
Some staff in the human resources department in Hong Kong were also dismissed, while employees in the real-estate division were moved to Wal-Mart China’s headquarters in Shenzhen, said two company officials familiar with the matter, who asked not to be named as they aren’t authorized to comment.
Hong Kong-based vice presidents in charge of the two divisions have left the company, according to the people, who didn’t specify the number of employees affected.
Wal-Mart didn’t immediately respond to queries sent yesterday about dismissals in the city, which traditionally served as the retailer’s headquarters for Asia, overseeing businesses in China, Japan and India.
Price is taking charge of a region where the retailer is also closing about 30 outlets in Japan as it focuses on fresh food offerings, according to the company.
In India, Wal-Mart said in October it will open the company’s first new wholesale store after a two-year hiatus. It ended a six-year partnership with India’s Bharti Enterprises Pvt. last year, choosing to focus on wholesale in the country, rather than retail.
Wal-Mart appointed Murali Lanka, an executive at its U.S. business, as chief operations officer of its Indian unit to lead store operations, sales, business development and marketing. The appointment will be effective Dec. 1, the company said last month. AP