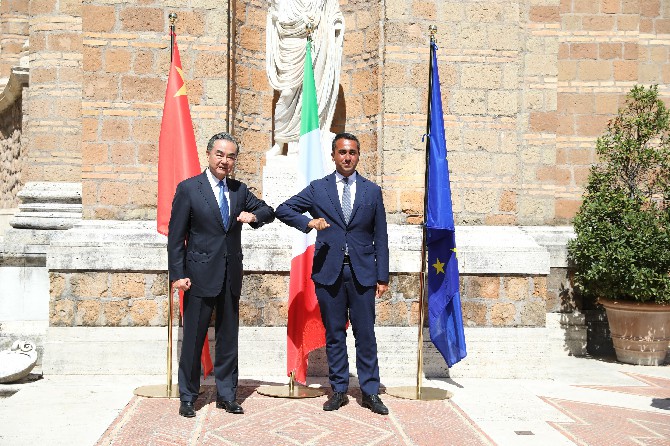 Italian Foreign Minister Luigi Di Maio said he emphasized during a meeting with his Chinese counterpart yesterday [Macau time] that Italy would be monitoring closely the implications of new Chinese security measures in Hong Kong.
“I reiterated that, together with all our European partners, we have emphasized that Hong Kong’s stability and prosperity, based on the one country, two systems principle, are essential,” Di Maio told reporters in a joint press conference with Chinese Foreign Minister Wang Yi.
It is equally essential to ‘’preserve the high degree of autonomy and the fundamental rights and freedoms’’ guaranteed to Hong Kong citizens, he said.
Rome is the first stop of Wang’s five-nation European tour, which includes France, Germany, the Netherlands and Norway. It is Wang’s first foreign trip since the coronavirus outbreak in China that turned into a global pandemic.
Wang emphasized China’s support for close ties with Italy, with which it formed diplomatic relations 50 years ago.
The ministers were scheduled for a private lunch after their press statements.
The visiting diplomat’s top agenda item in Europe was expected to be pushing Europeans to guarantee market access to telecom giant Huawei, and broader efforts to keep European countries quiet on Hong Kong and to take Beijing’s side in its tariff war with Washington.
Before the meeting, prominent Hong Kong democracy activist Nathan Law delivered a letter to the foreign ministry asking Di Maio to address ‘’the Hong Kong problems and human rights violations’’ during the meeting.
China’s contentious national security law for Hong Kong is seen by many as Beijing’s boldest move yet to remove the legal firewall between the semi-autonomous territory of Hong Kong and the mainland’s authoritarian Communist Party system.
Italy last year was the first major democracy to sign an agreement to join China’s “Belt and Road” initiative. The program includes major infrastructure investments to create a conduit for trade and China’s construction industry. Both the United States and Italy’s European partners see it as a threat as China seeks to project its power.

Beijing firm on detention of two Canadians
China said yesterday it remains firm in its insistence that Canada make the first move to end the detention of two Canadians, following a meeting of the two countries’ foreign ministers.
Former Canadian diplomat Michael Kovrig and Canadian entrepreneur Michael Spavor have been held in China on unspecified national security charges for more than 620 days in apparent retaliation for Canada’s late 2018 arrest of Meng Wanzhou, an executive at tech giant Huawei and the daughter of the company’s founder.
Meng was detained at Vancouver’s airport at the request of the United States, which wants her extradited to face fraud charges over the company’s dealings with Iran. Her arrest enraged Beijing, which calls it a political move aimed at constraining China’s rise as a global technology power.
Canadian Minister of Foreign Affairs Francois-Philippe Champagne urged Beijing to release the two Canadians during a meeting with Chinese Foreign Minister Wang Yi in Rome on Tuesday.
The two are suspected of engaging in “activities endangering China’s national security” and their cases are being handled “in strict accordance with the law while protecting their legal rights,” foreign ministry spokesperson Zhao Lijian said at a daily briefing on Wednesday.
China has “made it clear to the Canadian side that it should respect the spirit of the rule of law and China’s judicial sovereignty,” Zhao said, adding that China was not responsible for the current difficulties in bilateral relations.
“The Canadian side is well aware of the crux of the problem and should immediately take effective measures to correct the mistakes and create conditions for the bilateral relationship to get back on track,” Zhao said.
In addition to detaining Kovrig and Spavor, China has also restricted various Canadian exports to China, including canola seed oil, in an apparent attempt to pressure China into releasing Meng, who is residing in one of her Vancouver mansions under a form of house arrest.
Since her detention, China has also sentenced four Canadians convicted on drug charges to death, an unusually high number for foreign suspects held in China.
While the Canadian government has made no indication it will trade Meng for Kovrig and Spavor, calls have arisen among the Canadian public for a deal to be made.
“The blind adherence to the use of the rule of law and no ransom ensures that Kovrig and Spavor will remain forgotten within Chinese prisons for the foreseeable future,” former foreign service officer Gar Pardy wrote in the Ottawa Citizen newspaper last week.
“The offering of Meng Wanzhou in exchange for Kovrig and Spavor is the only answer,” Pardy wrote in the opinion piece. MDT/AP