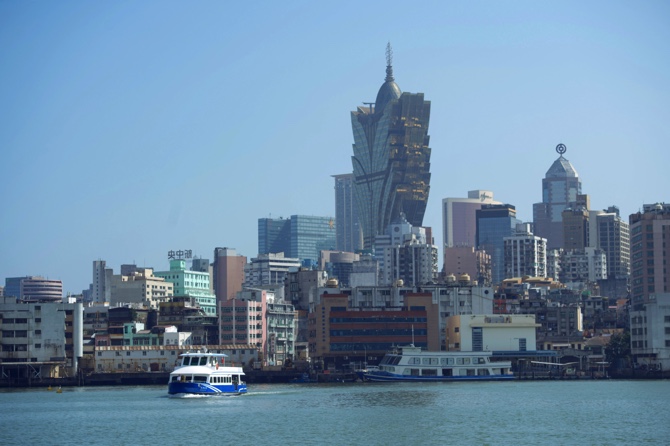 A ferry departs from Macau to Wanzai Port in Zhuhai

The resumption of ferry services at the Wanzai Port yesterday after a nearly four-year break was marred by the developing Wuhan coronavirus situation in Macau.

Yesterday, Macau’s Chief Executive and Guangdong’s vice-provincial governor, together with other government officials from both Macau and Guangdong Province, presided over the reopening of Wanzai Port.

The Zhuhai side expects to record between 8,000 and 10,000 daily crossings on average at the new port.

Zhuhai authorities will open the port from 7 a.m. until 10 p.m. daily, as opposed to the previous arrangement when the port was only open for seven hours per day.

The arrival hall on the Macau side will consist of six e-crossing channels and two manual channels. Another three back-up manual channels will be available inside a visa office.

On the Zhuhai side, there will be six e-channels in both the departure and arrival halls. Zhang Shili, an official from the neighboring city on the mainland, told the media on the sidelines of yesterday’s reopening ceremony that the Zhuhai side can complete a single crossing in 10 seconds. “The crossing time is shorter, and the experience is better,” said Zhang.

The Zhuhai government has already planned a railway station two minutes away from Wanzai Port. The station is an extension of several of Guangdong’s railway systems and will connect Wanzai to Guangzhou and Jiangmen.

Yesterday, it was originally arranged that a representative of Zhuhai’s customs authority would be interviewed by the media on the sidelines of the ceremony. However, Zhang was also questioned about Zhuhai’s preparations for the Wuhan pneumonia situation.

Zhang said that Wanzai Port will carry out body temperature monitoring and that once a person with an unusually high body temperature is detected, they will be put in an isolation area at the port and later sent to a Zhuhai hospital for medical observation.