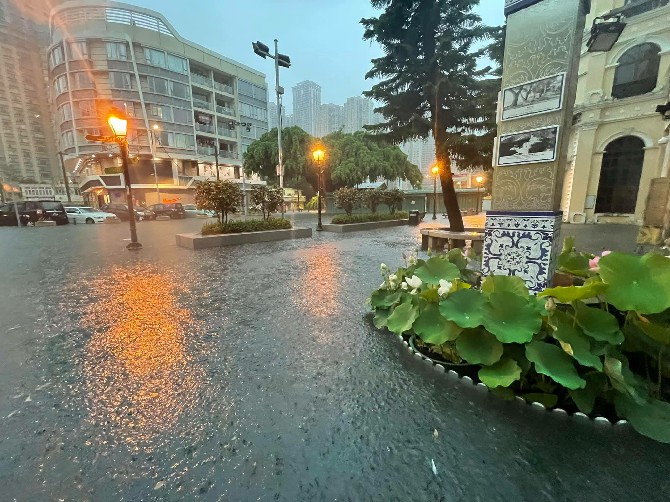 Both Secretary for Transport and Public Works Raimundo do Rosário and director Leong Weng Kun of the Meteorological and Geophysics Bureau (SMG) stressed the unpredictability of rainfall levels at the parliament.
The SMG held an orientation session at the Legislative Assembly on Monday to explain and conduct a “meteorological education” session for the lawmakers, with a sole emphasis on rainstorms and typhoons.
At the session, both officials reiterated the irregularity of rainfall levels that present a significant amount of uncertainty for the forecast of whether heavy rainfall is expected, and if so, how heavy it will be.
Last month, the city saw extremely heavy rainfall twice near the start of school time, requiring rainstorm warnings to be issued which triggered the school-suspension mechanism.
On one of the two occasions, the single-day precipitation level broke the city’s record. The new record also surpassed the city’s average June rainfall level.
Parents, guardians and caretakers slammed the weather bureau for not issuing the warnings earlier, based on the fact that their children had either already arrived at school soaked or were already on the way.
In response, the SMG head told participating lawmakers that heavy rainfalls in Macau normally last for about 80 minutes, meaning that peak precipitation normally concludes within that amount of time.
Moreover, the city’s small size presents a greater challenge for the SMG to make timely forecasts on rainfall.
“For example, on June 28, the precipitation level in Macau was 116mm and in Coloane it was 14mm,” Leong recalled. As such, Leong hinted that an individual in Coloane will need a black rainstorm warning, which indicates a forecast rainfall level of 80mm within an hour, but this would be incongruent with the rainfall within that area.
Another critical factor, according to the SMG head, is that Macau relies on forecasts when issuing rainstorm warnings. Alongside Rosário, Leong reiterated current technology is not capable of making a 100% accurate forecast on rainfall, let alone precise precipitation levels.
Some schools reportedly asked parents to take their children home after the warning was issued, which is forbidden by regulations.
On this matter, Rosário emphasized that the weather bureau is only authorized to forecast and monitor the weather, as well as to issue corresponding warnings. “As to how the warnings are interpreted by different entities, [the bureau] is in no position to give orders or instructions,” the senior official said.
Both officials also reminded the public to stay vigilant even when the lowest yellow warning level was issued because the conditions may deteriorate drastically within a short period of time.