A weekend of football and fashion as Beckham returns to Macau 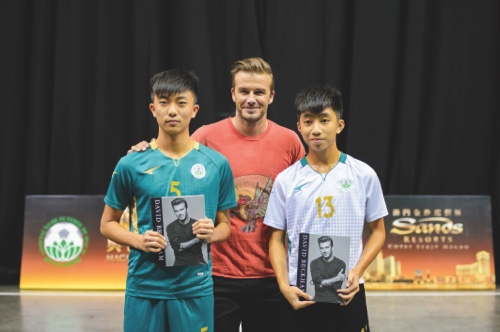 It was a busy weekend for international sports star and global celebrity David Beckham. The football and fashion icon returned to Macau to meet with Sands China staff and open the newly renovated Shoppes at the Four Seasons, as well as attending a football clinic with 40 local youths.
At the Four Seasons Hotel on Saturday, Beckham shared the secrets of his success, including his life after football as an entrepreneur, how he coaches people and the major differences between being a player and a businessman. Around 100 Sands China managerial-level employees, including the top 20 “Because We Know” Sands China product knowledge competition winners and the winners of “Because We Care Best Leadership” team member awards attended. The event was part of Sands China’s commitment to giving its employees opportunities to advance their careers through interacting with and learning from people in the business world. Beckham presented the winners with award certificates and autographed books, and three managers picked up tips from the soccer star as they asked him questions regarding his managerial style.
Furthermore, on the same day Beckham opened the newly renovated Shoppes at the Four Seasons luxury duty free shopping mall. Already a major retail destination, the mezzanine underwent a major HKD100 million revamp and now boasts improved accessibility and a more vibrant ambience. Following the renovation, the mall houses 260,000 sq. ft. of retail space and an expanded mix of over 140 luxury brands from around the world. These include Bally, Dolce & Gabbana, Escada, Fratelli Rossetti, Jimmy Choo, Kurt Geiger, Lana Marks, MCM, Marina Rinaldi, and Rene Caovilla. The mall also now features an additional seven duplex stores totaling 39,000 sq. ft, boasting the world highest-grossing retail space at over USD5,500 per sq. ft. on average.
Speaking to a packed audience of journalists, Shoppes at the Four Seasons retailers and Sands Retail representatives, Beckham said, “It’s wonderful to be back in Macau and a real honor to be asked to open Shoppes at Four Seasons, one of the most successful luxury shopping malls anywhere in the world. I encourage everybody who visits Macau to pay a visit and check out your favorite luxury brands!”
Also during his weekend visit, the Sands China Community Academy with the support of the Macau Football Association, organized an event yesterday at The Venetian Macao’s Cotai Arena where the former England captain and Manchester United player attended a football clinic with 40 local youths from the Macau U15 and U17 football teams. After observing a friendly match between the two teams, Beckham provided valuable feedback to the young players. He then chose one player from each team to receive an award based on their performance, as well as taking group photos with them.
Beckham made his debut appearance in Macau at The Venetian last November to announce a business partnership in Asia with Las Vegas Sands Corp., the parent company of Sands China Ltd. He then returned in April this year to share his football stories and experiences with around 100 local students.
The Times will publish a feature about Beckham’s visit in tomorrow’s edition.