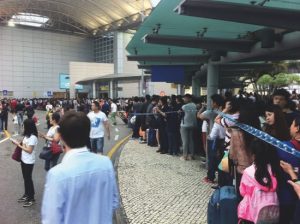 Crowds gather outside the Border Gate because of technical failure

The Secretary for Security, Wong Sio Chak, has ordered a review of current arrangements and an update to contingency plans in order to avoid a repeat of the technical failure experienced on the weekend at Macau’s immigration checkpoints.
According to a statement from the Government Information Bureau (GCS), the secretary is “paying close attention” to the technical incident, which led to the clearance system failing to operate normally.
The problem affected the city’s immigration checkpoints with the mainland, those at the airport, and those serving the ferry ports connecting Macau to Hong Kong. The statement clarified that the cause of the breakdown may have been the result of one or many factors, including previously unidentified problems in the operating system of the clearance service or an unusual breakdown of the server’s subsystem that led to the malfunction of e-channels and of the operating system.
The government will enhance its capabilities – such as its contingency measures, crowd control arrangements and cross-departmental communication – in preparation for the possibility of similar incidents occurring in the future, Wong said in a cross-departmental meeting earlier this week.
GCS added that the backup system for the server’s subsystem might also have been affected, resulting in technical failure.
Following the incident, the Public Security Police introduced an internal directive regarding maintenance of the immigration clearance operating system. They have also updated their contingency plan regarding system breakdowns and ordered the subsystem used for immigration clearance be optimized.
The bureau is now seeking to complete the reconstruction of the backup system and then commence a study into whether there is a need for an additional backup system.
According to the statement the government has previously recognized the need to build another backup for the operating system used for the immigration clearance service. Such a backup system was tested at the beginning of the year but was not in operation at the time of Saturday’s service interruption. The statement did not clarify why this was the case.
GCS added that the government is aware of the challenges arising from the efforts that have previously been made to optimize the immigration service, including the inclusion of more e-channels for residents and e-card channels for mainland passport holders.