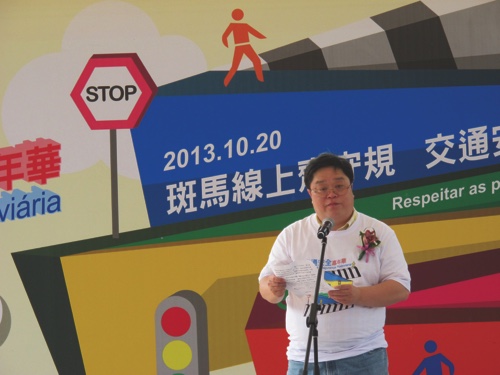 The Transport Bureau (DSAT) director Wong Wan indicated that a higher taxi fare is likely to come into force within this year. He also reiterated that Macau needs a taxi operator to provide “dial-a-cab” services, but did not say when the government would launch the bidding procedure for a new dial-a-cab concession contract.
Mr Wong said on the sidelines of yesterday’s TDM Forum that DSAT has finished analyzing the proposal of adjusting taxi fares, submitted by six local taxi associations in April.  The decision will be announced after the administrative procedure is finished.
“We can see that, following  inflation in recent years, there is the necessity [for taxi fares to increase]. We have finished analyzing the issue and will make a decision in the near future,” he said.
The director continued to reveal that the increase would be similar to the inflation rate in the previous few years, but would not surpass it. “The fact is, it has been four years since [the previous fare rise]. We are going to [take inflation] in these four years into consideration,” he said.
Mr Wong said that after collecting opinions from the public, DSAT believes that the increased taxi fare is not unreasonable for passengers to shoulder.
Moreover, Wong Wan said that it is crucial for the future dial-a-cab service provider to be able to charge passengers with an additional fee. However, he said that this requires consensus within society. He also explained that the operational scale of the former dial-
a-cab concessionaire Vang Iek Radio Taxi (yellow taxis) was too small, leading to high operational costs. He claimed that the future dial-a-cab concessionaire must operate as a company and must have a certain operational scale.
The director was one of the guests on yesterday’s TDM Forum panel and was again asked to explain the abrupt notice of Vang Iek’s exit from the market. He said that the only issue on which DSAT failed to reach a consensus with the yellow cab company was the charging of an additional fee.
“We think that this is not only about the amount of additional fees. We think society should thoroughly discuss the charging of additional fees. Also, we have to [see] if the fee matches the amount the public and residents can sustain… As a result, we proposed that the renewing of the contract and the implementation of an additional fee should be separated. However, [the yellow taxi company] insisted that the two have to be considered together,” he explained.
Another guest on yesterday’s panel, the Macau Taxi Driver Mutual Association president Kuok Leong Son, claimed that since the termination of Vang Iek’s concession, calls to the association’s radio station have increased from an average of about 400 per day to more than 700 per day, with a successful matching rate of around 55 percent.
He also found that many of the calls where passengers were not picked up involved a pick-up location at the roadside instead of a particular building or venue.
Meanwhile, the president of another local taxi association “Associação dos Comerciantes e Operários de Automóveis de Macau”, Leng Sai Vai, believes that the authorities have to create the conditions for the future dial-a-cab service provider to survive. He thinks that it is not enough to have additional fees if the calling rate is low. “Therefore, if there has to be a dial-a-cab operator, the government has to support it with policies,” he said.