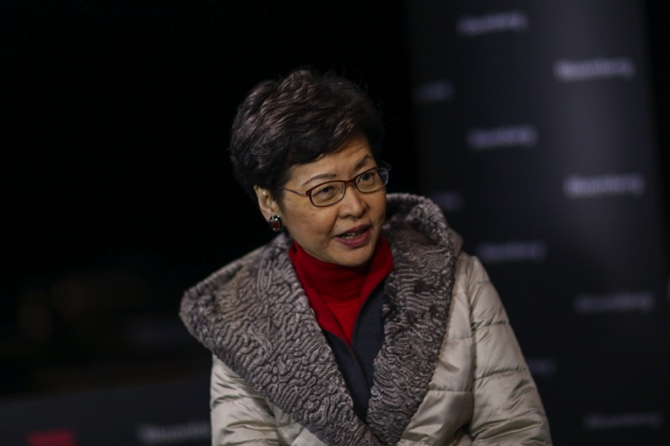 Chinese President Xi Jinping offered personal assurances that he wouldn’t use protests in Hong Kong as an excuse to increase Beijing’s control over the city, Chief Executive Carrie Lam said, as she used a World Economic Forum visit to try and reassure global investors.

Speaking to Bloomberg Television in Davos on Tuesday, Lam pushed back against protesters who say China is tightening its grip on Hong Kong and maintained the Asian financial center remains stable despite more than seven months of violent protests.

“There is no truth in the allegation that the central government is tightening the grip on Hong Kong,” Lam said in the interview. “The central government has time and again made it very clear that they want Hong Kong to succeed under ‘one country, two systems’ and a high degree of autonomy.”

“It was made very clear to me by President Xi Jinping on the three occasions that I met him” in recent months, she added.

Lam arrived in Davos after a fresh bout of protest violence in downtown Hong Kong, with four police officers injured in clashes with demonstrators Sunday following an otherwise peaceful rally. More than seven months of pro-democracy protests have battered the former British colony’s economy, undermined its reputation for political stability and increased geopolitical tensions between the U.S. and China.

China has governed Hong Kong since 1997 under a “one country, two systems” framework that preserves its freedom of expression, independent courts and capitalist financial system. The city’s pro-democracy opposition has accused Beijing of eroding that autonomy and stonewalling calls for meaningful direct elections of the chief executive, who’s currently selected by a 1,200-member committee.

In the interview, Lam pushed back against the idea that Beijing was calling the shots in Hong Kong as the city grappled with the protests, maintaining that Hong Kong has a significant degree of autonomy. She said she “almost immediately” suspended legislation allowing extraditions to China that initially prompted the unrest, and that “one has to wonder what are the underlying factors that have caused this sustained social unrest.”

“They have not given any explicit directive on how to handle it, except that they’ve made it clear that the solution also has to abide by ‘one country, two systems,’” she said, referring to China’s directives. “You can’t go beyond the constitutional requirement to solve this issue. Similarly, domestically, I couldn’t go beyond the rule of law to solve this political crisis.”

The most consequential demand from protesters is universal suffrage, which was promised in the Basic Law – the city’s mini-constitution – since China took control of the former British colony in 1997.

Asked why she hasn’t agreed to universal suffrage as demanded by protesters, Lam stuck by a proposal that China made in 2014 to have a committee historically stacked with Beijing loyalists screen nominees. The proposal also requires that the nominee “loves the country and loves Hong Kong.”

“I wouldn’t say that framework required approval by the central government as far as the candidates are concerned,” Lam said, adding that she helped design the proposal. The nominating committee, she said, is “not entirely within sort of Beijing loyalites: You have professional people, you have representatives from the trade unions, from the business sector. But ultimately there is another Basic Law provision that the chief executive has to be appointed by the central people’s government.”

“It depends on whether we can build consensus on this very important issue within a framework laid down in the Basic Law,” she added.

Lam has also refused to consider other key protester demands including an independent commission of inquiry, which has statutory power to issue search warrants, compel testimony and hold witnesses in contempt if they fail to cooperate. Instead, she has opted for methods with limited investigative powers that have failed to appease the city’s pro-democracy movement.

In the interview, Lam said the Independent Police Complaints Council – the city’s police complaints watchdog – was sufficient to look into the unrest, calling it “an equally independent and statutory mechanism.” The overseas experts she appointed to advise the body withdrew from the process, citing the agency’s lack of independence and resources.

“One of the important principles that I have adhered to in dealing with this very difficult situation is we need to protect the institutional strengths of Hong Kong and uphold the rule of law,” Lam said. “So if we have already an independent statutory mechanism to deal with that situation, that mechanism must be put in place for very good reason in the overall interest of Hong Kong.”

She also said protesters were demanding an amnesty for everyone arrested, including for serious crimes like arson, petrol bombs and setting a man on fire, which “nobody could agree to.”

“Am I going to respond to those political demands in order to solve this problem?” she said.

The protests have had a profound impact on the city’s retail- and tourism-dependent economy, with rallies deterring visitors from mainland China and elsewhere and leading companies to cancel many local events. The government has estimated that the economy contracted 1.3% last year, and economists forecast stagnation this year.

Lam’s administration has so far proposed additional spending of about HK$25 billion ($3.2 billion) – or less than 1% of the city’s gross domestic product – despite holding fiscal reserves in excess of around HKD1 trillion.

“Those four rounds of measures introduced and announced by the financial secretary are really relief measures,” Lam said. “They are there to support the companies, especially the small and medium enterprises, so that we can preserve as many jobs as possible.”

“Ultimately to take Hong Kong out of the economic difficulties requires first of all stability,” she added. “Secondly it’s an early restoration of law and order, and thirdly it’s continued government investment in important sectors – for example, innovation and technology.”

Rumors have persisted for months that Beijing may replace Lam, whose approval rating is hovering near a record low of 14%, according to a Hong Kong Public Opinion Program survey released earlier this month. So far, Xi has reaffirmed China’s support for Lam, although Beijing replaced its main representative in Hong Kong earlier this month with an official some analysts described as a hardliner.

Asked her thoughts on the approval rating, Lam said: “I have confessed and I have taken full responsibility for misjudgment and for the sort of a lack of a full assessment of the situation in taking forward the bill. But let me make it very clear, hand on my heart, that bill was well intended.”

“It is not difficult to quit, but walking way from such a big dilemma and problem now is, in my view, not very responsible,” she said. “Because we have several crises that we need to manage at the same time, I will do my utmost to stay in this position to help arrest the current situation,” Lam added.

Asked about her legacy, Lam noted it was her 40th year in Hong Kong’s public service.