Events across the globe are being held to mark tomorrow’s World Migratory Bird Day. Macau is no exception and local birdwatchers will organize activities to draw people’s awareness to the protection of both birds and their habitats. The Civil and Municipal Affairs Bureau (IACM), along with the “Macau Aves Society” are going to organize a bird watching event on Sunday at several locations in the Cotai area.
The organizers expect citizens will extend their knowledge about the ecology of birds, and also to promote the protection of wetlands in the city. Lectures on basic birdwatching skills will be offered to applicants.
Chris Tai, president of the bird watching association since 2010, has consistently attended birdwatching events over past years. When asked about the reasons why he loves watching birds, Tai replied by saying that his hobby allows him to cultivate his mood. Moreover, he is aware that local environmental changes can be deduced from observing the birds and their behavior. 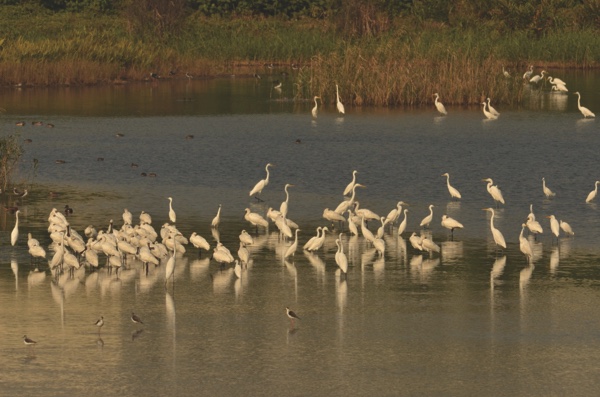 Tai told the Times that “the government does not pay close attention to bird’s habitats,” and remarked that urban development is restricting the habitats of birds. According to him, the number of birds landing in Macau has decreased every year since 2011, back when several plots of land started to give way to construction projects.
He exemplified his message with the Cotai area, which, when under construction, took over shoals around the area. Consequently, birds that used to spend their migration period on these spots started to disappear gradually. Tai noted a decline of 20 sighted species during 2016 compared with that of five years ago.
“Some species can’t be seen now, for instance the black tail godwit and the Terek sandpiper,” indicated Tai. Most noticeably, according to him, the total number of migratory birds dropped 50 percent compared to 2011, “with the exception of some stable species.”
Each year, during the months of March, April, September and December, birds stop in Macau before heading to their final destination. In Macau, Tai acknowledged that people who consider birdwatching a hobby “probably do not exceed 200,” a number that stems from registered participations in relevant birdwatching events. “Very few people pay attention,” regretted Tai, adding that most people who are interested “age from 30 to 60-years-old.” The older ones have more spare time to fully enjoy their hobbies.
According to the birdwatcher, the construction of the Hong Kong-Zhuhai- Macau Bridge is responsible for the disappearance of seagulls from the shoals around the border gate. Staff reporter