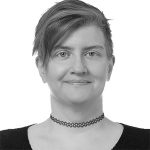 For the second time in a row, polling has failed to correctly assess the mood of the nation heading into a U.S. presidential election. The debacle will inevitably engender recriminations, soul-searching and efforts to do a better job next time around.
I’m beginning to think that we’d be better off if we kicked the habit.
For many Americans, following polls has become a sort of addiction. We nervously refresh polling sites, hoping to get a sense of the range of possible outcomes, what our compatriots are thinking, so we can worry, act or abdicate accordingly. This might be fine and even useful if the polls were at all reliable. Unfortunately, I don’t think they can be. They will all too often lead us to operate on a deeply flawed set of expectations.
My skepticism stems in part from my experience of the 2008 credit crisis. I worked in finance, where — much like pollsters — we used statistical models to assess the range of possible outcomes, in this case for mortgages and related investments. I witnessed the devastation that ensued when those models proved horribly wrong, and I initially believed that better modeling could help. It took me quite a while, and lots of calls with banks and hedge funds, to realize that doubling down on math wouldn’t solve the problem. The issue was bad data: People throughout the system, from borrowers to bank executives, just had too much incentive to lie and dissemble.
Doubling down on models hasn’t helped in other areas, either. Consider the way artificial intelligence helps spread misinformation and radicalize Americans on Facebook and other social networks. Time and again, executives have sought to fix the problem with more artificial intelligence, and failed. It’s not going to work. The issue is people, not technology.
Fast forward to the 2020 presidential election. The post-mortem of the polling failure has already begun. Experts want to double down — go deeper, more granular, understand how Latinx communities diverge and so on. Let’s just do it more and better!
No, let’s not. It’s no longer reasonable to assume that we can get better. For all the effort that a lot of smart people have put into it, polling is just hard. There’s too much problematic, biased and missing data. People who don’t trust the polls don’t talk to pollsters. Sometimes they flat out lie.
Let’s detox instead. Our national obsession with knowing what other people think is getting in the way of understanding what ‘we’ think — or whether we should bother to vote, or how we should go about working for change. Sure, campaigns and policy makers need to know these things. But the extent to which the rest of us have become versed in how other slivers of population plan to vote (or don’t, depending on whether they’re lying) is a sign of toxicity, a desperate attempt at gaining control and minimizing uncertainty in a situation that is inherently uncertain and uncontrolled.
Step one of recovering from an addiction is to admit you have a problem. After last night, I think we can reasonably say we do. Cathy O’Neil, MDT/Bloomberg