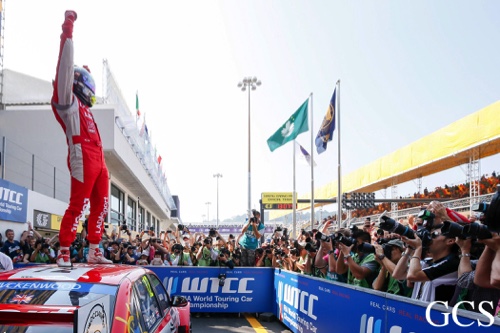 Lada driver Rob Huff won a dramatic finale for the FIA World Touring Car Championship in Macau, after late-race heartache for early leader Tiago Monteiro in race two yesterday.
Monteiro made a brilliant start from fourth on the grid to take the lead, as Huff and Citroen’s Yvan Muller moved up behind him at Lisboa, when pole position man Hugo Valente in second place ran slightly wide.
Despite coming under pressure from Huff early on, Monteiro was able to steadily extend his advantage until a Safety Car came out on lap eight, when Ma Qing Hua crashed headfirst in to the barriers at Fishermen’s Bend. 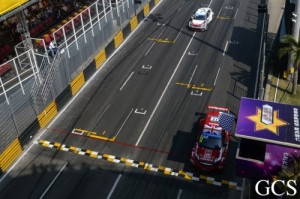 At the restart on lap 10, Monteiro got away well and appeared to have victory in the bag. But halfway around the lap his Honda slowed with a power- steering problem – yielding the lead to Huff.
Now in second place, Muller did all he could to steal the lead on the final two laps, but Huff held fast and crossed the finish line 0.344 seconds ahead for his second win of the season.
“To finish the season off with the win, considering where we started this year, is fantastic,” he said. “We won on merit and it shows all the hard work we have done over the course of this year.”
Third place eventually went to Valente, whose initial mistake at Lisboa, as he attempted to overtake Monteiro, had dropped him down to fifth, right behind Norbert Michelisz.
Much of his race was spent holding off race one winner Jose Maria Lopez, who shadowed him for the whole race.
However, Valente made the most of the opportunity afforded by the Safety Car restart to dive past Michelisz on lap 10 and secure the final podium spot.
The only other major incident of the race came on lap four, when Gianni Morbidelli lost control of his Chevrolet at Fishermen’s Bend and crashed into the barriers.

Macau may be dropped from 2015 calendar

At the end of the races, Tiago Monteiro commented on the high probability of Macau being dropped from the 2015 FIA World Touring Car Championship calendar. According to the website Touring Car Times, “the traditional season finale at Macau should be replaced by a final round in a Middle East country, a race which would likely be run under floodlights at night.”