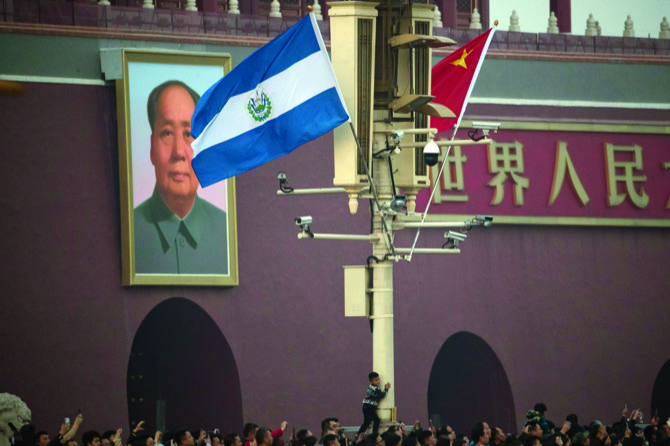 The state visit comes one day before that of the president of the Dominican Republic, whose country also switched allegiances from Taiwan to China this year.

El Salvador and the Dominican Republic are among a growing number of countries that have cut ties with Taiwan in favor of resuming or establishing relations with China, which considers the self-governing island democracy to be part of its territory.

Only 17 mainly small, developing countries now recognize Taiwan as a sovereign nation. Taiwan split from mainland China during a civil war in 1949, and Beijing has been steadily ratcheting up diplomatic and economic pressure since Taiwanese President Tsai Ing-wen took office in 2016.

Beijing’s aggressiveness is largely driven by Tsai’s refusal to endorse Beijing’s “one-China principle,” which maintains that Taiwan is part of China and that the Communist Party-ruled administration in Beijing is China’s sole legitimate government.

Taiwan has long been a wedge between China and the United States, which has formal relations with Beijing but maintains robust unofficial military and diplomatic links with the island.

Washington’s de facto ambassador to Taiwan, Brent Christensen, said Wednesday that the U.S. would be opposed to “unilateral attempts to change the status quo” in Taiwan — a reference to increasing Chinese military intimidation.

China’s wooing of Taiwan’s allies in what the U.S. considers its backyard has rung alarm bells in Washington.

He said that any attempt to determine Taiwan’s future by “other than peaceful means” is a threat to regional security and a matter of “grave concern” to the United States.

While the U.S. encourages dialogue between China and Taiwan, it will at the same time cooperate to promote shared democratic values and improve economic relations with the island, Christensen said.

That includes ensuring Taiwan has a voice in international organizations from which Taiwan has been excluded. China has used its economic might and diplomatic clout to keep Taiwan out of the United Nations, and has increased the pressure by blocking Taipei’s representatives from attending international meetings such as the World Health Assembly, while pressuring multinational companies ranging from fashion brands to airlines to describe Taiwan as part of China.

The U.S. pulled out its diplomatic envoys last month from El Salvador, Panama and the Dominican Republic after those countries cut ties with Taiwan.

At a conference in Washington attended by Salvadoran Vice President Oscar Ortiz last month, Vice President Mike Pence said El Salvador and other Central American countries should strengthen bonds with the U.S. “even as countries like China” try to “expand their influence in the region.” Yanan Wang, Beijing