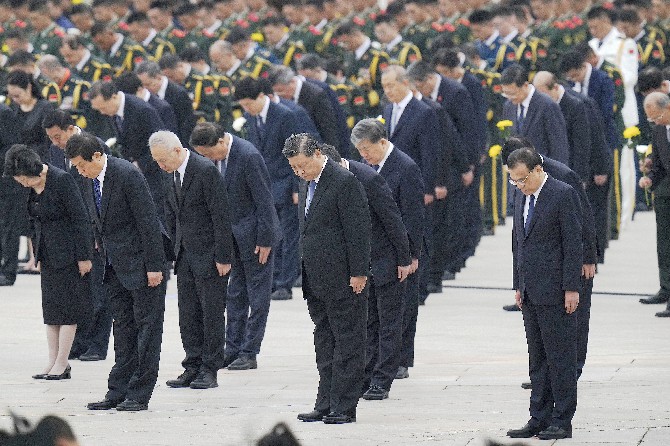 Chinese leader Xi Jinping paid respects at a solemn commemoration yesterday for those who died in the struggle to establish Communist Party rule, as he leads a national drive to reinforce patriotism and single-party authority.
Xi and the six other members of the party’s all-powerful Politburo Standing Committee led aged veterans and government and military leaders in paying their respects at the Monument to the People’s Heroes in the center of Tiananmen Square while a military band played.
Xi, who heads the party and also serves as state president, made no remarks, although Premier Li Keqiang is scheduled to address a reception yesterdayy evening.
The Martyr’s Day ceremony underscores the stress Xi places on Communist traditions after establishing himself as China’s most powerful leader since Mao Zedong, who founded the People’s Republic in 1949 after sweeping to power in a bloody civil war. This year’s ceremony follows commemorations of the centenary of the founding of the party in 1921.
While building up a cult of personality, Xi has pushed a hardline on foreign policy and a crackdown on free speech and political opposition in the semi-autonomous city of Hong Kong. Relations with the U.S. have sunk to their lowest level in decades, with Beijing issuing a bevy of complaints on issues from human rights to Washington’s support for Taiwan.
China claims the self-governing island democracy as its own territory and threatens to use military force to bring it under Beijing’s control. Xi, who also controls China’s vast military, has upped that threat by sending military aircraft into airspace near the island on a near-daily basis while ground troops conduct drills on the coast opposite.
Tiananmen Square and surrounding roads were closed off for Thursday’s ceremony, which began with a trumpet fanfare, the singing of China’s national anthem and a minute of silence.
Steps and the upper level of the monument, an obelisk standing 10 stories partially carved with images from the struggle to establish Communist rule, were covered in red carpet.
The ceremony also featured a choir of children wearing the white shirts and red scarves of the party’s Young Pioneers youth organization singing their anthem, “We are the heirs of communism.”
Martyr’s Day is commemorated on the eve of China’s National Day, which begins a 10-day holiday. MDT/AP