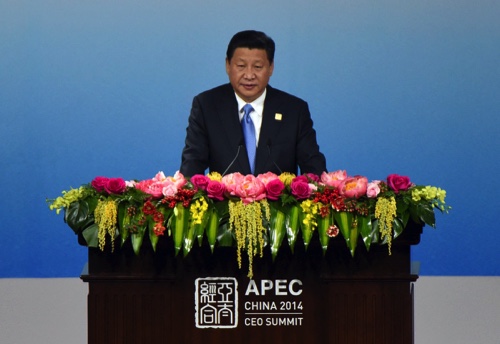 President Xi Jin-
ping signaled China is ready to accept a lower rate of growth, assuring executives that the economy is more resilient than ever and his government can safely guide the country through any slowdown.
“Even a growth rate of about 7 percent will put China among the top performers in the world in terms of both speed and size,” Xi told the Asia-Pacific Economic Cooperation CEO Summit in Beijing. “Some worry whether China’s growth rate will slow down further, or whether China can overcome the obstacles — risks are indeed there but they’re not that scary.”
Calling a slowdown part of the new normal in China, Xi offered a primer of his government’s effort to wean the economy from a dependence on exports and infrastructure and make domestic consumption the key growth engine. Xi’s mention of the 7 percent figure may signal the government’s expectations for 2015. China’s economy is targeted to grow at about 7.5 percent this year, the slowest since 1990.
“Seven percent looks like the consensus for growth target next year,” said Shen Jianguang, Hong Kong-based chief Asia economist at Mizuho Securities Asia Ltd. “A further signal that Chinese policy makers are willing to tolerate lower growth to pursue structural reform. I think a lower bottom line of growth of 6.7 percent should be also acceptable.”
Yesterday’s summit and an APEC ministers’ meeting that ended Saturday saw Xi put his vision for Asian regional cooperation on the agenda, with the proposed Free Trade Area of the Asia-Pacific agreement featuring in discussions and winning support from Chile president Michelle Bachelet.
The U.S. is pushing for a separate regional trade agreement, the Trans-Pacific Partnership, which doesn’t currently include China, highlighting competition between the world’s two largest economies for influence in Asia.
Underscoring the benefits for those who cooperate with China, Xi said outbound investment will total USD1.25 trillion in the next decade and the country will import $10 trillion worth of goods over the next five years. On Saturday, China announced it will create a $40 billion Silk Road Fund to help build infrastructure along the route that extends by land and sea to Europe.
China is promoting the FTAAP as a way to bolster commerce across a group of nations that includes the world’s three largest economies. Asian trade and foreign-affairs ministers agreed yesterday to start a two-year study on the pact.
“For the Asia-Pacific and the world at large, China’s development will generate huge opportunities and benefits and hold lasting and infinite promise,” Xi said.
Without mentioning the Trans-Pacific Partnership, Xi said a key challenge in the region is that “various types of regional free trade arrangements mushroomed, creating puzzling choices.”
He added that the region is at a crossroads. It can move forward in integration or to fall into the “vortex of fragmentation,” he said. Bloomberg