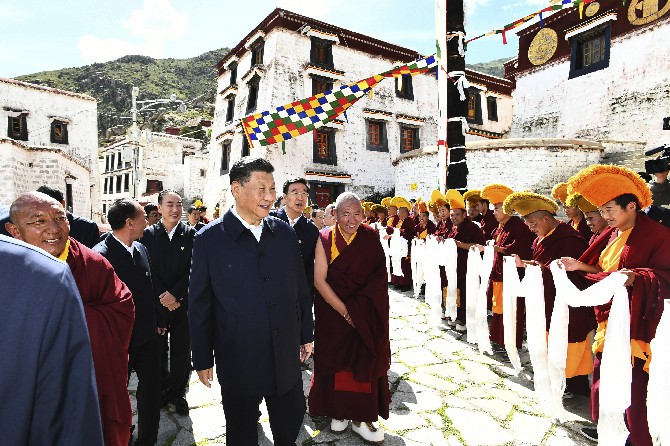 Chinese leader Xi Jinping has stressed fully implementing the guidelines of the Communist Party of China (CPC) for governing Tibet in a new era and writing a new chapter of lasting stability and high-quality development for the plateau region.
Xi, general secretary of the CPC Central Committee, Chinese president and chairman of the Central Military Commission, made a rare visit to Tibet from Wednesday to Friday for the 70th anniversary of Tibet’s peaceful liberation, the first time in the history of the Party and the country.
Xi extended congratulations to the 70th anniversary of Tibet’s peaceful liberation, visited officials and ordinary people of various ethnic groups and conveyed the CPC Central Committee’s care to them.
Xi said over the past 70 years Tibet has made historic strides in the social system and realized full economic and social development, with people’s living standards significantly improved.
Xi stressed efforts to strengthen developing border areas, emphasized the four major issues of stability, development, ecology and border-area consolidation, and called for new achievements in protecting the ecology of Qinghai-Tibet Plateau and advancing its sustainable development.
On Wednesday, Xi arrived at the Nyingchi Mainling Airport and went to the Nyang River Bridge, where he learned about the ecological preservation of the Yarlung Zangbo River and its tributary Nyang, as well as the construction of nature reserves. Xi underscored the importance of protecting and restoring the ecology of major river basins.
During a visit to the city planning hall of Nyingchi, Xi called for scientifically delineating the boundaries of urban development and drawing the red lines for protecting ecosystems.
Xi said the village epitomizes the economic and social achievements Tibet has made over 70 years since its liberation. He also hailed the village as a model of ethnic unity.
On Thursday, Xi went to Nyingchi Railway Station, learning about the overall design of the Sichuan-Tibet Railway and how the Lhasa-Nyingchi section has been operated since June 25. Aboard a train to regional capital Lhasa, Xi inspected the construction along the railway. He hailed the railway as a major move to boost Tibet’s development and improve people’s living standards.
On Thursday afternoon, Xi went to the Drepung Monastery located in the western suburbs of Lhasa. Xi acknowledged the contributions the monastery has made in upholding the leadership of the CPC, supporting the socialist system and safeguarding national unity.
Xi stressed fully implementing the Party’s fundamental guidelines governing religious work.
He also stressed governing religious affairs in accordance with the law and guiding Tibetan Buddhism to adapt to a socialist society.
He said that at present, Tibet is at a new historical starting point of its development, and the Party’s leadership must be upheld and the path of socialism with Chinese characteristics must be followed. MDT/Xinhua