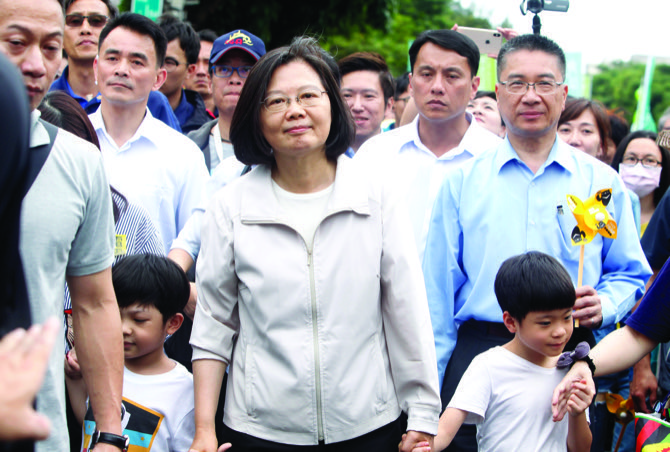 Taiwanese President Tsai Ing-wen this weekend reaffirmed her opposition to nuclear power before marching with anti-nuclear protesters, reviving an issue that has proven politically divisive in the past.

Tsai said at a news conference that her administration was taking efforts to promote renewable energy and reduce the need for nuclear power.

“In the past, people often said we won’t have electricity without nuclear power, or that Taiwan does not have the conditions to develop renewable energy, or even that renewable and green energy are too expensive,” Tsai said. “But after the efforts we have made since taking office, such talk has dissipated.”

She also vowed to reach her targets in reducing emissions from thermal power plants and to retire current nuclear power plants, though without giving any timeline.

“We will carry on with the targets to eliminate nuclear power and reduce carbon,” Tsai said. “We will reach the targets and Taiwan will not be short of electricity” for the island’s 23 million people.

She then joined hundreds of people who marched through the streets of Taipei, the capital, beginning at the Presidential Office Building in the city’s center, in a show of opposition to nuclear power.

Tsai’s Democratic Progressive Party has long opposed the nuclear industry, particularly construction of the high-tech island’s fourth nuclear plant on the tip of the island, north of Taipei. Nuclear power now accounts for about 15% of Taiwan’s electricity generation, according to the World Nuclear Association.

The main opposition Nationalist Party has promoted nuclear power as one of the best ways to provide reliable energy to the island. The issue has in the past sparked occasionally violent clashes between proponents and supporters. AP