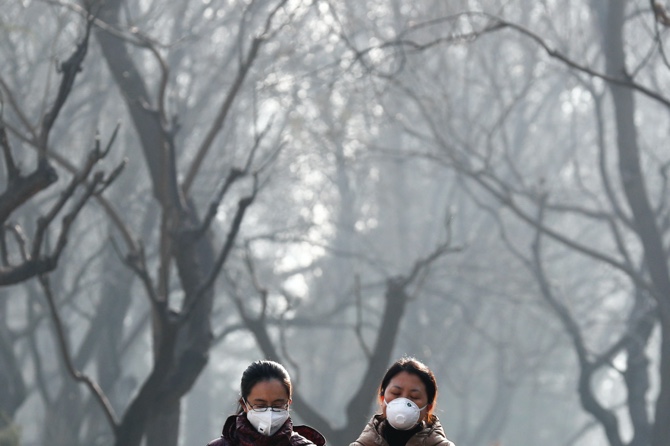 In this Dec. 19, 2016, file photo, women wearing masks to protect themselves from air pollution walk through Ritan Park shrouded by dense smog in Beijing.

China has realized its 2020 target for reducing carbon emissions ahead of schedule, the ecology and environment ministry reported yesterday.

The ministry said China’s CO2 emissions per unit of GDP had fallen last year by 4% from a year earlier to stand at 45.8% less than in 2005.

Vice Minister Zhao Yingmin told reporters that completed the target of CO2 reduction for 2020 ahead of schedule, while 14.3% of the energy China consumes now comes from non-fossil fuel sources.

“These are hard-won results from the efforts of promoting a green and low carbon economy,” Zhao said.

While becoming more efficient, China saw its annual carbon emissions nearly triple between 2000 and 2018 as the economy grew at a rapid pace. It has been the world’s biggest emitter since 2005, when it passed the U.S.

Yet China is also the leading market for solar panels, wind turbines and electric vehicles, and the biggest manufacturer of solar cells.

“We are still faced with challenges of developing our economy, improving people’s livelihood, reducing poverty and cleaning up our environment,” Zhao said.

He said China would also remain committed to its carbon reduction commitments under the Paris climate change accord, even after the U.S. issued formal notification this year of its intention to withdraw from the pact.

China declared under the agreement that its carbon emissions would level off by 2030 and carbon intensity would ultimately be reduced by 60-65% from the 2005 level.

“We will full commit ourselves to our promises on climate change and continue to push forward the transition of our economy toward low-carbon and high-quality,” Zhao said. AP