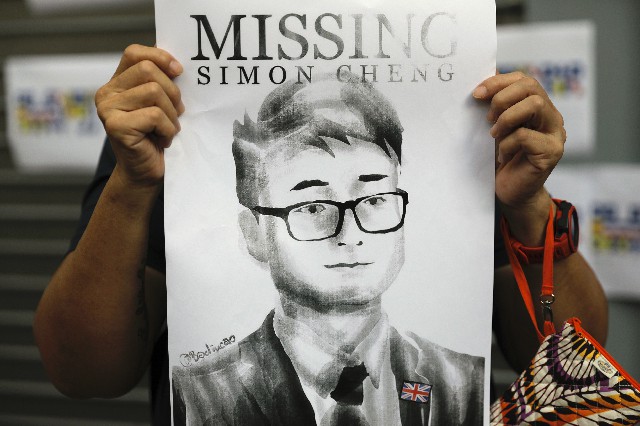 A former British Consulate employee in Hong Kong who says he was detained and tortured by Chinese police for information on protesters complained to U.K. regulators that China’s state TV channel aired his forced confession.
Simon Cheng filed a complaint with Ofcom, Britain’s broadcast regulator, against China Global Television Network, or CGTN, which he says violated broadcasting rules on fairness, privacy and accuracy.
He said he was tortured by secret police in mainland China to glean information about massive anti-government protests roiling Hong Kong. Chinese police acknowledge he was held for 15 days in August but gave no reasons. The ruling Communist Party’s People’s Daily newspaper has denied he was tortured and released surveillance footage it said proves his guilt and voluntary confession to soliciting prostitution.
Cheng recounted his ordeal for the first time this month in a lengthy online statement and media interviews.
CGTN, the international arm of China Central Television, broadcast its report shortly after he broke his silence. The channel is available on free and pay television channels in Britain.
China Media Group, which controls CGTN and other state media, did not respond to a request for comment.
Ofcom, which has the power to issue big fines or revoke broadcast licenses, also did not respond to a request for comment.
Cheng, who worked as a trade and investment officer to attract Chinese investment to Scotland, was returning from a business trip to mainland China when he says he was detained.
In his 14-page complaint made public yesterday, he says he was shuttled between detention and interrogation centers while hooded and handcuffed, and interrogated while bound in a “tiger chair,” a metal seat with arm and leg locks. He says he was also shackled in a spread-eagle position for hours and forced to assume stress positions for lengthy periods.
Eventually, Cheng says he agreed to confess to the minor offense of soliciting prostitution to avoid harsher treatment and a heavy sentence on national security charges. He says his captors filmed him multiple times making his confession, based on a script they gave him.
“CGTN was well aware that the recording they used in their broadcast was extracted under extreme duress and distress,” Cheng said, adding that the broadcaster falsely said he went on trial, when in fact he was in extrajudicial “administrative detention.”
Cheng is the latest to turn to regulators with allegations of forced confessions on Chinese state TV. Peter Humphrey, a British corporate investigator imprisoned for two years in China, has filed an Ofcom complaint. So has Angela Gui, whose bookseller father went missing in Thailand and later turned up in detention in China. The cases are pending.
Cheng no longer works for the consulate and is in hiding. He is being assisted by Peter Dahlin, a Swedish activist who was also detained and forced to confess on Chinese TV after a crackdown on his human rights group.
In 2012, Ofcom revoked Iranian state-owned Press TV’s license following a complaint by a journalist that the station aired an interview with him while he was detained. AP