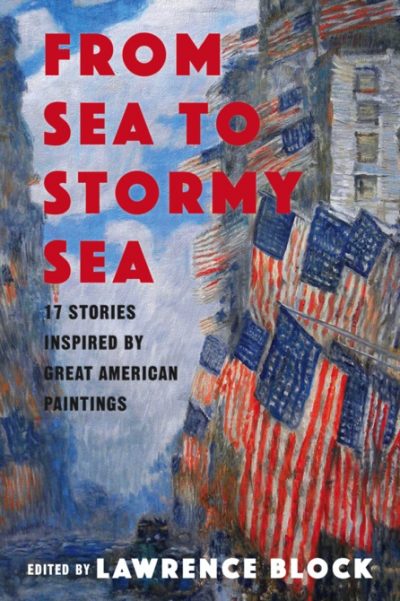 Writers take their inspiration from a variety of sources: an unforgettable face, overheard conversation or perhaps, a painting.

The well-known crime writer Lawrence Block has parlayed that last scenario into two volumes of short stories, the first inspired by works of Edward Hopper and the second, favorite paintings of his authors.

Now he has come out with a third, “From Sea to Stormy Sea,” an anthology of 17 stories that riff exclusively on American paintings, from Robert Henri’s portrait of Gertrude Vanderbilt Whitney to Andy Warhol’s mural for the 1964 World’s Fair, “Thirteen Most Wanted Men,” and Mark Rothko’s shimmering “Number 14.”

Since the writers he’s chosen tend to specialize in crime and genre fiction, the stories are chock-full of loners, losers and cynics who get to say snappy lines like, “Sex. Religion. Dining out. Sooner or later, some human being is going to make you regret participating in any or all of the above.” (Spoken by the enterprising heroine of Jan Burke’s “Superficial Injuries.”)

One of the very best is “Baptism in Kansas” by detective writer Sara Paretsky, who uses the 1928 John Steuart Curry painting of the same name to conjure up a vivid portrait of the hardscrabble lives of white farmers in Kansas in the early 1900s, their religious revivals, as depicted in the artwork, and racist campaigns to get rid of the Native American population.

Other standouts include “The Man From Hard Rock Mountain,” a post-apocalyptic fantasy by Jerome Charyn based on the eerie Rockwell Kent engraving, “Twilight of Man,” and the deliciously noir “On Little Terry Road” by Tom Franklin and “Get Him” by Micah Nathan, inspired by paintings of the lesser known artists John Hull and Daniel Morper.