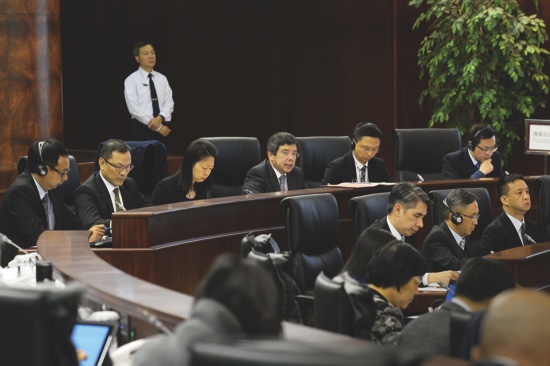 Given the major delays on the construction of the Light Rapid Transit (LRT) depot, the government has reached an agreement with Mitsubishi, the manufacturer of the trains. The Japanese company will store and maintain the “Ocean Cruiser” trains, which will run on the LRT railway after its completion. The delay will cost local authorities up to MOP700 million, the Secretary for Transport and Public Works Raimundo do Rosário revealed yesterday at the Legislative Assembly, while presenting the Policy Address for the areas under his watch.
The secretary asked the Transportation Infrastructure Office coordinator Ho Cheng Kei to comment further on the case. “The trains are already made and will be kept by the manufacturer, since they can’t be shipped to Macau. (…) We have negotiated a deal with Mitsubishi worth MOP700 million that takes into account all the project’s delays,” Ho said.
Since the contract with the LRT depot builder was recently canceled, works are expected to resume in 2016. This is one of several major infrastructure projects likely to see significant development next year, Mr Rosário said pragmatically. Others include the LRT 9.3 kilometer and 11 stations Taipa section, slated to be concluded before year-end (although the trains will only run in 2019, according to the latest estimate); the public tender for the LRT’s Barra station and Taipa’s Pac On ferry terminal, which will be fully working by the second semester of next year. Also in 2016, he expects to see 700 public housing units concluded, launch works on the future Macau Prison, and start working on the fourth link between Macau and Taipa. As the Chief Executive Chui Sai On announced previously, that link will be via a bridge, since the possibility of building a tunnel was discarded.
The need to introduce measures that promote public transportation was one of the most discussed topics at the AL, with several lawmakers addressing questions related to the region’s well-known traffic woes. “Only with an efficient public transportation system will it be possible to attract more users,” said Au Kam San.
Mr Rosário noted that currently there are “129,000 motorbikes and 119,000 cars running in Macau,” adding that the figure indicates that the roads are clogged by traffic. “The local road system capacity and the environmental impact of such traffic are factors that must be assessed. The transportation system must be used rationally,” he said.
One of the attempts to achieve that goal is a dedicated corridor for buses stretching from Lam Mau Dock to Barra. It is also probable that owning a vehicle in Macau will become more expensive, with more inspections and costlier parking.
Regarding the recovery of unused land lots, the secretary said that the priority would be to built public housing units there, “whenever it is possible.” However, he acknowledged that there is strong litigation whenever an attempt is made to recover idle land, including appeals and rulings suspended for a period defined by the court. To give an example, he said that from the 22 plots recently recovered there is only one case where the owner issued a letter accepting the government’s action, although pledging to seek compensation in court.
Mr Rosário also confirmed that the government is studying a new housing scheme to cater for the needs of residents who are unable to buy residential properties here and can’t apply for affordable housing (given that they have incomes above the cap to apply). A decision on the feasibility of such a plan will be taken in 2016, but he didn’t give many details on it. Earlier, Chui Sai On said at the AL that the plan’s beneficiaries could be the younger generations. According to the Secretary, the major hurdle to overcome before creating new housing schemes is the lack of land: “At this moment, we don’t have land available to build public housing units,” he revealed.
Regarding the Pearl Horizon case, which has recently been making the headlines, several lawmakers had comments and hints to make. “The [Pearl Horizon] concessionaire alleges that there were delays in the project assessment and approval [that led to its stalling] (…) Each case must be assessed on a singular basis and there shouldn’t be a one measure fits all procedure,” said Angela Leong, suggesting that a solution similar to the LRT depot (an extra judicial agreement) could be reached in the Pearl Horizon case.
Mak Soi Kun proposed the creation of a “transitory measure” to regulate the Land Law and avoid cases like Pearl Horizon, that left many pre-sale buyers fearing for the investment they made in installments to pay for homes that – everything indicates – are not going to be built.
Raimundo do Rosário acknowledged that the “new Land Law is regulating old issues”, but added that he had no alternative but to uphold it: “I’m not proposing to change the Land Law, since I don’t have that competence. If someone else takes that step, it can be done. But according to the Land Law there is no alternative solution that isn’t litigious in cases when the land concession expires.”

‘let’s firstly do what we decided to do’

The secretary seemed surprised by Chui Sai Peng’s suggestion of building a fifth link between Macau and Taipa. “We don’t even have the fourth link built!” Rosário replied. “Let’s firstly do what we decided to do.”

basic channels on the move

Lawmaker Chan Hong questioned Basic Television Channels Limited, a company set to be absorbed by TDM, which will be responsible for retransmitting the 49 channel package: “Will the number of channels be increased?” she asked. Derby Lau, the director of the Macau Post (which owns 25 percent of the basic channel company) said that the addition of other channels would “depend on the population’s needs”. “But to add more channels to the basic package may have consequences for Cable TV survival,” she added.