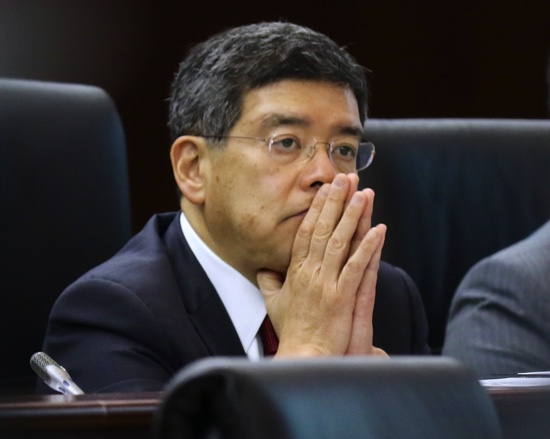 Raimundo do Rosário thinks while listening to a lawmaker

The five-year plan being introduced by the government is, according to the Secretary for Transport and Public Works, “a first attempt by the MSAR government to have a plan.” Raimundo do Rosário said yesterday during the second day of Policy Address debate at the Legislative Assembly (AL) that in Macau “we do not have the habit of planning.”
“It’s true! But I think there is time to start and to experiment. I myself took some risks here saying that the Pac On works will end, that the Taipa LRT works will end by 2019. We are creating a new culture – slowly, but we will,” he noted.
The secretary was replying to the interpellation from Pereira Coutinho, who said that the five-year plan will be useless if no concrete measures to fulfill it are taken.
Raimundo do Rosário reiterated that it will be “impossible” to complete all the infrastructures planed by the government in such a short time. “I do not know if I can do everything that was promised by the MSAR government, so many works to complete by 2019 – buses, public housing, taxis, land management, etc. I have to study and create new diplomas, sanitary landfills, the fourth connection between Macau and the islands, the Pac On ferry terminal, the more than forty thousand square-meter Islands healthcare complex. I do not know if I can finish my work by 2019,” he said.
During the second day of sectorial debate at the AL, the Secretary for Transport and Public Works stated that he expects to be able to solve the problem related to the lack of sand to build the new landfills during 2016.
In case the prospective Zone A landfills are not ready in time for the planned connection to the Hong Kong-Macau-Zhuhai bridge, a temporary bridge may be built on the Macau side.
“I hope that in 2016 there is sand. I do not know if it will be right at the beginning or the end of the year. It is merely my expectation. If we do not have sand, then we will proceed to the construction of a temporary bridge,” he said.
The secretary also added some information regarding reclamation Zone B, saying that a report over the location of the judiciary complex should be ready in February 2016.
The new judiciary complex and other public services are being planned for Zone B. The creation of facilities to host public services is considered a priority for the government in order to reduce the huge amount of public money paid to the owners of the buildings where the entities are currently hosted. The issue was a hot topic of debate during the Secretary for Economy and Finance Lionel Leong’s presentation.
Yesterday’s AL session also closed the sequence of sectorial debates over the government’s 2016 Policy Address.