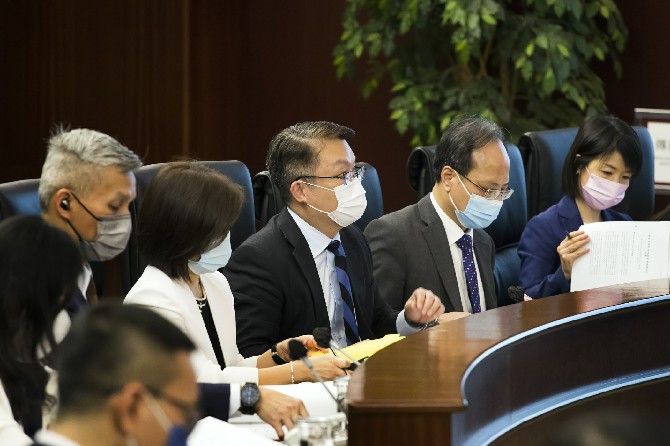 Requested to be addressed by the Legislative Assembly (AL) as an urgent matter, the amendment to the 2021 Budget Law has been unanimously approved by the lawmakers during yesterday’s plenary session.
Although finally all lawmakers voted in favor of the amendments, the matter resulted in an unexpectedly long debate with several lawmakers taking this opportunity to criticize the government, and especially Secretary for Economy and Finance, Lei Wai Nong, for several aspects included in the bill.
Lawmaker Sulu Sou took the opportunity to criticize the government for not listening to lawmakers’ opinion before launching the third round of the economic stimulus, which is accountable for part of the now approved amendments.
Sou also showed disapproval with the methods used by Lei, accusing him of calling the discussion on the budget law amendments at the very last minute of the deadline of April 29 which was mentioned to the public. According to Sou, the government had already expressed its intentions to amend the bill since March.
For Sou, the government’s timing aimed at the fast approval of the bill without leaving much time for debate or scrutiny from the AL.
Lawmaker Leong Sun Iok also took the opportunity to call, once again, for Lei’s attention on the problems faced by residents in a situation of being laid off and the drastic decline of income for many families.
In reply, Lei tried to ease the problem noting that the measures included in the budget amendment will have immediate effect in relieving the pressure from the families while it is expected that the economy can start to effectively recover from this weekend, the Secretary said, expressing hopes that the Golden Week from May 1 will be the “turning page” for the return of a high number of visitors to Macau.
Lawmaker Au Kam San also expressed concerns regarding other items included in the budget amendment, namely the one related to the payment of the construction works on the new Hengqin Border Post, saying, “Why is this included in this special amendment? This is a normal project that had been already budgeted, why is it included now in a bill to be discussed as a matter of urgency?” Au asked. In a confusing reply, the director of the Financial Services Bureau, Iong Kong Leong, only explained that the money refers to the last installment on the project that needs to be paid by the Macau government.
The amendment adds some 9.112 billion patacas from the fiscal reserves to the economic support plan as well as reinforces about 483 million patacas on the budget of the Macao Foundation.