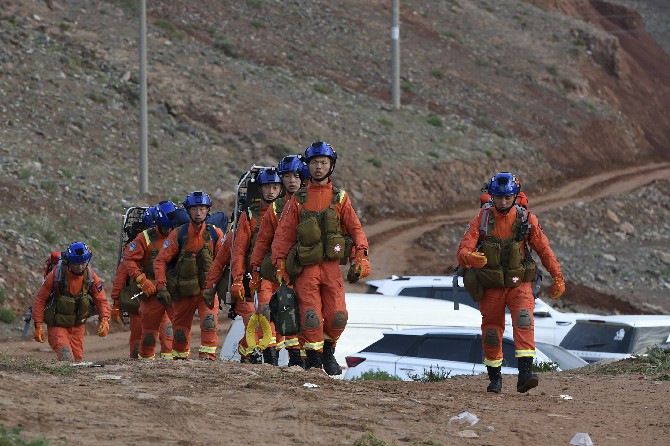 Twenty-one people running a mountain ultramarathon have died in northwestern China after hail, freezing rain and gale-force winds hit the high-altitude race, state media reported yesterday.
After an all-night rescue operation in freezing temperatures involving more than 700 personnel, rescuers were able to confirm that 151 people were safe, out of a total of 172 participants. Twenty-one had died, according to the official Xinhua News Agency, which said the runners suffered from physical discomfort and the sudden drop in temperature.
The runners were racing on an extremely narrow mountain path at an altitude reaching 2,000-3,000 meters. The 100-kilometer race was held Saturday in the Yellow River Stone Forest tourist site in Baiyin city in Gansu province.
Participants were not rookies. One of the deceased was a well-known runner Liang Jing, who had won a 100-kilometer race in Ningbo, reported the Paper, a state-backed newspaper based in Shanghai.
The race also followed a relatively established course, having been held four times, according to an account posted online by a participant in the race who quit and managed to make his way to safety.
But the weather caught them off guard, and on the morning of the race Saturday, he already sensed things were not normal. The runners were not dressed for winter-like conditions, many wearing short-sleeved tops.
“I ran 2 kilometers before the starting gun fired to warm up […] but the troublesome thing was, after running these 2 kilometers, my body still had not heated up,” the competitor said in a first-person account that has been viewed more than 100,000 times on his WeChat account “Wandering about the South.”
He later told the Paper that the forecast the day prior to the race did not predict the extreme weather they encountered.
The most difficult section, from kilometer 24 to kilometer 36, climbed 1,000 meters. There, he said the path was just a mix of stones and sand, and his fingers grew numb from the cold.
When he finally decided to turn back, he already felt dazed. He said he was able to make it to safety and met a rescue crew. He did not respond to a request for comment left on his social media account.
Some runners farther along the course had fallen off the trail into deep mountain crevices, according to a reporter for state broadcaster CCTV. It was not clear how many of them survived.
Video footage showed rescuers in winter jackets in the pitch-dark night searching with flashlights along steep hills and narrow paths. Search operations ended by noon Sunday, rescuers told Xinhua.
Online, some wondered what, if any preparations organizers had made in the event of an emergency. The race organizer did not immediately respond to calls seeking comment Sunday.
Baiyin city Mayor Zhang Xuchen held a news conference later Sunday and profoundly apologized as the organizer of the event. The government promised a full investigation.
“We express deep condolences and sympathy to the families of the victims and the injured,” the mayor said. MDT/AP

A strong, shallow earthquake shook southwestern China near the border with Myanmar, killing at least three people and injuring more than two dozen, while a separate, more intense quake early Saturday collapsed a bridge and caused other damage in central China.
The first, 6.4 magnitude earthquake hit Yunnan province late Friday. The second 7.3 magnitude quake occurred hours later in the southern part of Qinghai province, about 1,000 kilometers to the south, according to Chinese measurements.
U.S. Geological Survey geophysicist Jonathan Tytell said the two quakes were not related.
The Qinghai earthquake was followed by 453 aftershocks throughout the early morning into midday, according to the official People’s Daily newspaper. At least eight people were injured.
While no deaths have been reported so far in Qinghai province, the quakes tore up roads and bridges, with one collapsing completely, broken into segments.
The Yunnan province seismological bureau gave the magnitude of Friday night’s quake and said it struck 8 kilometers below the surface northwest of the city of Dali.
Shallow quakes often cause more damage, especially in populated areas.
The earthquake caused strong shaking around Dali, but Chinese news reports showed relatively little damage.
Three people died and 28 were injured, Yunan province’s publicity department said Saturday.
Relief efforts were underway, with the provincial authorities sending emergency rations and tents to the affected areas. In Qinghai, authorities set up temporary safety shelters due to continuous aftershocks.
Last year, a magnitude 5 earthquake in Yunnan killed four people and injured 23.
China’s worst earthquake in recent years struck the mountainous western portion of Sichuan province to the north of Yunnan in 2008, killing nearly 90,000 people. MDT/AP