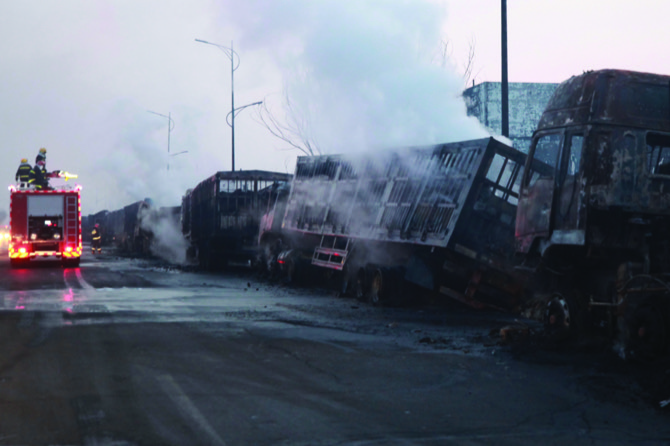 An explosion outside a chemical plant in northeastern China early yesterday killed at least 22 people and destroyed scores of vehicles, in the latest challenge to efforts to boost industrial safety in the world’s second-largest economy.

The blast occurred just after midnight at a loading area next to the plant operated by the Hebei Shenghua Chemical Industry Co. Ltd., according to a statement from the Zhangjiakou city government. The plant is located in Zhangjiakou, which is to play host to the 2022 Winter Olympics.

Another 22 people were injured and 38 trucks and 12 passenger cars were destroyed by fire, the statement said. “We request that citizens do not go to the site to watch in order to avoid disrupting recovery efforts,” it said.

An official at the city government propaganda department, who gave only his surname, Gao, said the accident’s cause was still under investigation and no other information could be provided.

Investigators suspect a truck carrying the highly flammable compound ethane for use by a separate nearby chemical factory exploded as it was passing the Shenghua plant, the official Xinhua News Agency reported. The flames then spread to other trucks but not to the Shenghua complex itself, which continued to operate as normal, the report said.

Footage from state broadcaster China Central Television showed row after row of charred tanker trucks with smoke still rising from some of them, hours after the explosion occurred.

On its website, Hebei Shenghua described itself as a “backbone enterprise of the city, and for the domestic chlor-alkali industry and one of the Top 500 chemical enterprises in the country.”

According to the U.S. Environmental Protection Agency, the chlor-alkali electrolysis process is used mainly to manufacture chlorine, along with hydrogen and sodium hydroxide solution.

Chlorine is one of the most commonly produced chemicals, widely used in the textile and paper industries, as well as for general cleaning and disinfecting and as a raw material for synthetic organic chemistry. It is also an essential component of construction materials, solvents and insecticides.

Industrial safety is a major concern in China, where requirements for the storage and transport of chemicals and other dangerous products are often weakly enforced.

A massive explosion in 2015 traced to improperly stored chemicals killed at least 173 people in Tianjin, about an hour east of Beijing. More recently, 52 people were sickened when around 7 tons of the common chemical additive C9 leaked while workers were loading barrels onto a ship in Fujian province on Nov. 4.

While the ruling Communist Party emphasizes improvements in industrial safety, the authorities remain extremely sensitive about the potential for social unrest.

Over recent years, grass-roots movements have brought thousands of people onto the streets in cities across China to protest accidents and plans for chemical plants, garbage incinerators and other projects deemed harmful to the environment.

In the C9 leak case, police staged a late night raid on the hotel room of a reporter writing about the accident for one of China’s most respected business media groups. The officers, who said they were conducting a routine inspection, departed after conducting a search, but footage of the raid was leaked online, prompting the local police department to issue a rare apology. Christopher Bodeen, Beijing, AP