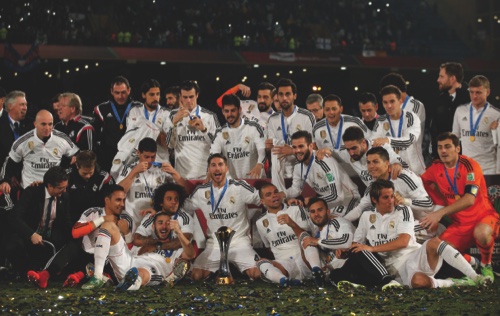 Real Madrid outclassed San Lorenzo of Argentina 2-0 in the Club World Cup final yesterday (Macau time) to put a crown on its status as the best club in world football.
The cup added to Madrid’s 2014 trophy haul of Champions League, Copa del Rey, and European Super Cup, and it will carry a 22-game winning streak into 2015.
Sergio Ramos made the breakthrough, leaping up and heading in Toni Kroos’ sweetly stuck corner after 37 minutes. Ramos also got Madrid off the mark in its 4-0 victory over CONCACAF champion Cruz Azul in the semifinals.
Loosely marked in the area, Gareth Bale doubled Madrid’s lead early in the second half. The South American champion’s goalkeeper, Sebastian Torrico, should have done better with Bale’s left-footed shot, which bobbled under his body.
This was Madrid’s fourth world club championship, first in the Club World Cup format, and its last competitive match of 2014.
“An unforgettable year,” Ramos said.
Madrid dominated the often scrappy, and at times ill-tempered final in Marrakech’s Grand Stade. If San Lorenzo’s most famous fan, Pope Francis, wasn’t watching on television, then he didn’t miss a classic.
In Madrid’s ongoing streak of 22 wins, a Spanish record, Madrid has scored 81 goals and let in just 10. The Spanish giants are 4 wins away from the all-time record of 26 straight victories achieved in 1970-71 buy formidable Ajax of Johan Cruyff & company.
Losing manager Edgardo Bauza rated Madrid “one of the four or five best teams in the world.” He congratulated his counterpart, Carlo Ancelotti, for putting together a team as solid in defense as it is in attack.
That “makes it a very dangerous team and it will keep on beating records. I don’t have any doubts about that.”
Ancelotti was emphatic: “Real Madrid is now the best team in the world.”
Although he didn’t score in two games in Marrakech — almost a goal-drought for him — Cristiano Ronaldo nevertheless netted a total of 61 for Madrid and Portugal in 2014 — not far shy of his 69 in 2013, and 63 in 2012. Although off-target in Morocco, Ronaldo’s unrelenting consistency this year could again secure him the Ballon d’Or as world’s best player on Jan. 12.
Against San Lorenzo, Madrid seemed set to score in the very first minute. Kroos pinched the ball off Juan Mercier, San Lorenzo’s captain, and fed it to Ronaldo. He, in turn, passed it to Karim Benzema, finely positioned in the box, but his foot caught a divot on the tired-looking turf as he went to shoot, pitching him face-down. Benzema picked himself up, cussing the offending hole.
The indefatigable, joyous singing of San Lorenzo’s fans in the crowd of 38,345 was more uplifting than much of the team’s football. San Lorenzo sat back, letting Madrid bring the game to them rather than the other way around.
San Lorenzo had as many yellow cards — four — as shots on goal. Only late in the second half did San Lorenzo make Iker Casillas work hard in his 700th competitive game as Madrid goalkeeper, with Enzo Kalinski and Mercier both forcing saves.
Having already beaten the champion of Africa, ES Setif from Algeria, in the quarterfinals, New Zealand side Auckland City knocked off another continental champion, Cruz Azul of Mexico, in the third-place match, 4-2 on penalties after fulltime finished on 1-1. John Leicester, Marrakech, MDT/AP