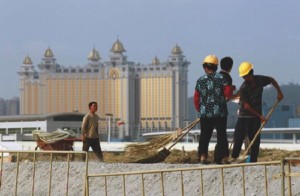 Up to 24,000 local employees’ monthly income does not reach MOP8,000, said the Secretary-general of the Macao Federation of Trade Unions Kong Ioi Fai at TDM’s weekly forum yesterday morning, in which a majority of participants voiced their concerns over the possible reduction of the government’s cash handout next year.
During the one-hour forum, Kong stressed the importance of the annual subsidy to most grassroots laborers in the city, most of whom struggle to make a decent living.
The latest data from the Statistics and Census Service shows that the overall median monthly employment earnings in the first quarter of the year stood at MOP15,000.
One female citizen suggested in the sharing session that the government could possibly lay out a “concrete mechanism” so that “local citizens would not have to make wild guesses” over how much would be distributed every year.
The president of Macao Civic Power Agnes Lam reckoned the scheme could be revamped to serve a particular group of people in need.
“The name of the cash sharing [scheme] is like a spell that prevents us from thinking of how to better use the money. It’s not necessary to do away with the scheme. Instead, [let’s] think of who should be given the limited money. We could consider [the form of] dependence allowance that entitles university students to the grants for their study,” advised Lam.
As most citizens on the forum expressed their disapproval about the possibly shrinking amount, Sulu Sou, head of the New Macau Association, criticized the SAR government for lavishing huge sums of public funds on festive functions, as well as its tendency to grant more to local large-scale groups. Staff reporter