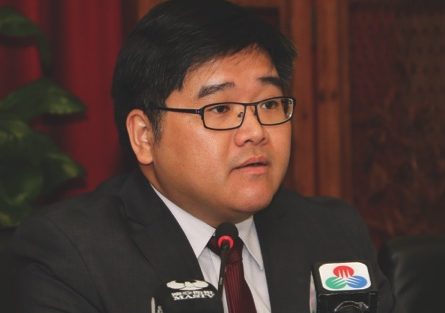 The programs under the Continuing Education Development Plan initiative, which was implemented 5 years ago by the Education and Youth Affairs Bureau (DSEJ), have gathered the interest of close to 240,000 residents, according to DSEJ’s Continuing Education Department head, Kong Ngai.
Kong was speaking on the sidelines of the plenary meeting of the Youth Council at the  press conference held by the Education and Youth Affairs Bureau.
“Around 60 percent of the population [in conditions to apply to the program] already registered an account (during the 2nd phase),” said Kong, adding that Macau has a program participation rate “far higher” than other neighboring regions.
The official used the example of the territories of Hong Kong and Taiwan where the participation rate is 12 and 7 percent respectively.
The 3rd phase, currently still under review, is expected to have a period of three years similar to the first two phases of the plan. According to a study ordered by the DSEJ to the Hong Kong company Policy 21 Limited, the duration is considered “adequate”.
“A very long period might be difficult to manage in terms of the government budget,” Kong said. “We believe that three years is a good period for both parties, as for the people, it gives them time to establish a study plan according to their availability of time,” he added.
According to the information from DSEJ, the same study done by the HK company will be used as “reference for the conception of the 3rd phase.”
Although there is no clear calendar or budget for the 3rd phase, Kong says that one of DSEJ’s aims is the “electronization” of the system that will operate through online platforms of application, submission of documents and communication to “ease the process and allow a better collection of statistic data.” Kong highlighted that the system to be in place will also allow “closer contact with the course organizers in order to improve on the monitoring and inspection.”
Six cases of suspected fraud related to the Continuing Education scheme were prosecuted. DSEJ’s Continuing Education Department head added that “they are related to fraud and forging of documents, namely attendance sheets.”
On a separate topic, the DSEJ Youth Department head, Un Choi Cheng commented on the mid-term review of the Youth Policy of Macau saying, “80 percent of the work have been already initiated,” adding that “the aim is to achieve, as it’s said on the 5-year plan, reach the goal of 95 percent [of the policies planned].”
The official added that included in the 20 percent that DSEJ will work on, and that are currently in a “preparatory study phase”, will be measures like the “cooperation between youth associations according to the ‘one belt, one road’ initiative.”