In the aftermath of recent meetings held to discuss the human rights situation in Macau, the United Nations Committee Against Torture (CAT) has produced a list detailing various issues of concern to the organisation. These include the lack of progress in combatting human trafficking, incidents of police abuse and the extradition of prisoners to mainland China. On November 18, delegates of the Chinese, Hong Kong and Macau governments gathered at the Palace of Nations in Geneva to debate with the UN body. Local activist Jason Chao also attended the event as a Non-Governmental Organization delegate. The MSAR government recently rejected the CAT’s suggestion to establish an independent human rights body in Macau. 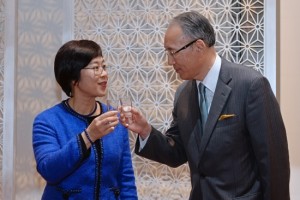 The Secretary for Administration and Justice, Sonia Chan, has spoken at a Japanese National Day reception, ahead of the Japanese Emperor’s birthday which will occur later this month. “It is on this day of joy and happiness that we gather here to celebrate the Japanese National Day and the birthday of His Majesty the Emperor of Japan,” said Chan on Wednesday. “Macau and Japan have long enjoyed a mutually beneficial relationship. Since the liberalization of the gaming industry and with the increasing investments […] the collaboration between our two territories [has] been elevated to a new level,” added the secretary. On the Emperor’s birthday, December 23, a public ceremony will be held at the Imperial Palace. The general public are only permitted to enter the inner grounds of the Imperial Palace on the Emperor’s birthday and on January 2.

Professor Ben U Seng Pan, of Synopsys (Macau) and the University of Macau (UM) Faculty of Science and Technology, has been awarded a fellowship of the Institute of Electrical and Electronics Engineers (IEEE) for the year 2016. Professor U becomes the first scholar educated in Macau to attain the prominent position at the IEEE. “I am very honored to be the first Macau-educated scholar elevated to [the position of] IEEE fellow,” the professor said. “It is not only recognition of my more than 20 year[s] of endeavors in the field of microelectronics in academia and industry; it also shows solid recognition of the world-class achievements of [Macau‘s] microelectronics team[s].” He was nominated by the IEEE Solid-State Circuit Society President-elect, Jan Van Spiegel from the American University of Pennsylvania. Currently, less than 20 percent of the 296 scholars who have been awarded an IEEE fellowship hail from the Asia-Pacific region.

Fitch Ratings has predicted that Macau’s 2016 gaming revenues will provide0 the good news the SAR has long awaited. While gaming revenues will post a full-year decrease of approximately one third for 2015, Fitch reports that 2016 will see only a moderate decline – approximately a 5-percent fall in revenues. “Investors in Macau’s gaming sector are playing the long game,” said Alex Bumazhny, Director of Gaming, Lodging and Leisure, according to Casino City Times. “As Macau’s gaming revenues begin to stabilize next year, we will start to see its long-term potential on the horizon,” he added. Fitch concluded that while the Asia-Pacific gaming market remains underpenetrated, the ability of Macau to grow its gaming sector will depend on the available infrastructure connecting the SAR to the mainland. According to the organization’s report, once the infrastructure is completed, Macau will be made more accessible to mass market gamers.