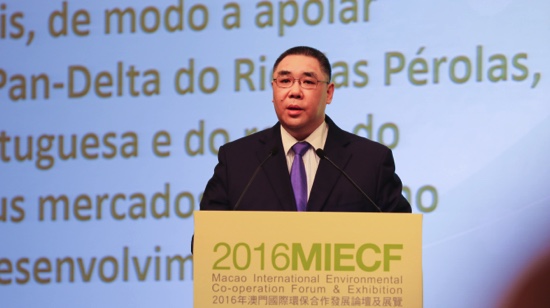 The 2016 edition of the Macao International Environmental Co-operation Forum and Exhibition (MIECF) kicked-­off yesterday morning at the Venetian Macao Ballroom, in the presence of high ranking officials from MSAR, Hong Kong and from several regions of mainland China.
In its ninth edition, the event elected “Green Economy – Opportunities for Waste Management” as the theme for this year.
Addressing the audience in English, the Macau SAR Chief Executive, Chui Sai On said in his welcoming speech, “Environmental protection is one of the main policies of the Macau SAR government. We are striving for a balance between environmental conservation and development by building a low carbon city and enhancing the growth of environmentally sustainable industries,” adding that “[the government] is committed to reducing the waste of resources and promoting  separation as a recycling policy in order to improve waste management. Macau is taking all kinds of measures to implement the Macau solid waste resource management plan so as to lay an important foundation for creating a green and low carbon city,” Chui said.
During the introductory keynote address that followed the opening ceremony, Xu Nanping, Vice-Minister of the Ministry of Science and Technology of the PRC, reiterated the words of President Xi Jinping that described the environment as something “irreplaceable,” explaining the efforts that the central government is taking towards environmental protection at different levels.
In this field, Xu recalled the advances that have been achieved by his Ministry, “we have been promoting the development of environmental protection technologies as well as a balanced development of the different fields in this area,” he said, adding that the government’s initiative, the “Blue Sky Project” is a good example of how the Central government is “pushing forward” to meet the needs of environmental protection in its aim towards wellbeing in both “economic, environmental and social” aspects.

One of the invited guest speakers to address the keynotes was Professor Walter Stahel, a professional in the field with extensive knowledge and experience and well-­known for being a pioneer in what is called the “Circular Economy.”
Prof Stahel, used his time to present to a room packed with delegates and field professionals on thte “Circular Economy” and on its advantages in terms of waste reduction. He started by saying “the objectives of a green economy are to prevent waste and to manage resource stocks,” illustrating his idea with the example of the “Christmas Tree” that undergoes a simple treatment (incineration) or it can be put through a “labor intensive process” of dismantling the product for reuse or recovery of all or most of its materials.
In Prof Stahel’s opinion that same example can be used for almost everything, pointing-out the advantages of the use of the “labor intensive process,” since this process not only benefits by creating less or no waste but creates a “local economy” that will create jobs and other possibilities around it.
Prof Stahel also explained how this process is also profitable stating “reused goods are usually one-third less expensive than the most cost efficient manufacture of a new one,” adding that this also creates a “logistic advantage” as the products are processed locally creating what he called a “consumer caring or teddy bear effect.”
“The more you use a product, the more you spend on labor and on local labor [shall lead to the] return of your investment in a product to grow about 5 times. This is what CEOs and CFOs are really interested in hearing.”
Although he makes the clear assumption that “this model is not of interest to the manufacturing industry, it has to be based on a political decision that will then have an effect on the economy. Manufacturing will always be needed to introduce new products and new ideas,” he said, concluding: “The product use is what we should focus on now.”
This new era, as he named it, will be the “Era of R,” transforming the 3R policy (Reduce, Reuse, Recycle) in “Reuse, Repair and Remanufacture (for technological upgrading).”
Prof Stahel pointed to the future as the time when we can “recycle atoms, slip molecules…,” stating, “whoever manages to control that process first will have a very big competitive advantage.”
In his opinion, waste is merely “abandoned resources,” stating that in order “to prevent waste we need to give it a value or make someone liable to pay for it,” he said.
Another aspect that Prof Stahel thinks is still lacking in economies is that “time” factor. He said, “we need to introduce time into economic thinking.” Time will be the factor that will promote profit, exemplifying this concept with a road bridge, which instead of being built and supported by the government was privately built and financed under a 78-year contract that will allow the investors to take profit exclusively from the toll fees to be charged over that period of time.
“Design and build things on your own. If you do things right you will get the profits in time by doing basically nothing,” he stated adding that people in general need to rethink what the economy is about and steer away from the idea of ownership and engage in the ideas of “rent, lease and share,” in order to “buy performance.”
The inventor of the “Cradle to Cradle” and “Performance Economy,” concluded by saying, “the interesting thing in all this is that there is nothing new here, we have been doing this for ages, we just don’t realize it. The idea of a permanent economy was introduced by Aristotle about 2000 years ago,” he concluded.
The MIECF will be running until April 2 when a “Green Public Day” will be open to the public from 10 a.m. to 5 p.m. 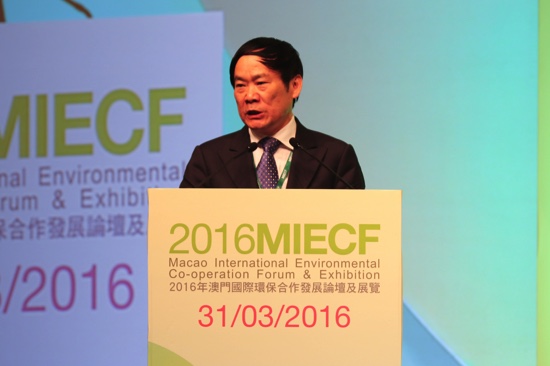 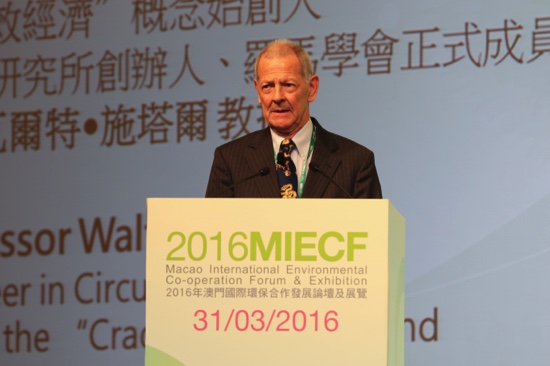 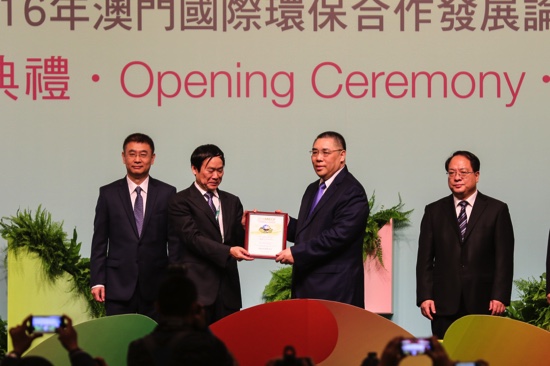 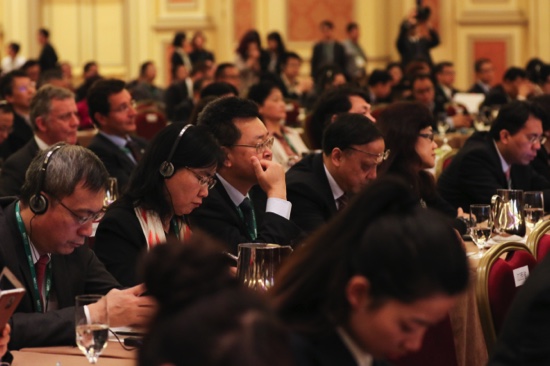