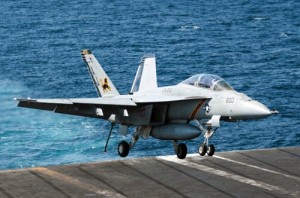 The U.S. decision to strike the Khorasan Group to stop a possible terror attack represents a significant expansion of the largely secret war against core al-Qaida, a group President Barack Obama has proclaimed was “a shadow of its former self.”
Administration officials said Tuesday they have been watching the Khorasan Group, an al-Qaida cell in Syria, for years. But Obama had resisted taking military action in Syria to avoid inadvertently helping President Bashar Assad, a leader the U.S. would like to see gone. That changed, officials said, because intelligence showed that the Khorasan Group was in the final stages of plotting attacks against the U.S. and Europe, most likely an attempt to blow up an airplane in flight.
On the same night that U.S. and Arab allies carried out more than 200 airstrikes against the Islamic State group in Syria and Iraq, the U.S. on its own launched more than 20 Tomahawk cruise missiles and other ordinance against eight Khorasan Group targets near Aleppo in northwestern Syria, Pentagon officials said.
It’s not clear yet whether the group’s leader, identified by U.S. officials as Muhsin al-Fadhli, was killed in the strikes. He is a Kuwaiti who spent time in Iran and has long been identified as a significant figure in al-Qaida.
But regardless of the impact, the need for such an operation against the Khorasan Group dealt a blow to the notion, oft-repeated by Obama administration officials, that core al-Qaida has been significantly diminished as a threat to the United States.
The Khorasan Group, after all, is made up of core al-Qaida veterans.
“There are remnants of core al-Qaida still left that are still a very potent threat,” said Rep. Adam Schiff, D-California, a member of the House Intelligence Committee.
“What this shows is that al-Qaida has not been decimated,” said Seth Jones, a counterterrorism analyst at the Rand Corp. “This is a network that spans multiple countries.”
The attacks add Syria to a long list of nations in which the Obama administration has taken lethal action against al-Qaida militants, including Afghanistan, Pakistan, Iraq, Yemen and Somalia. Ken Dilanian, Intelligence Writer, Washington, AP