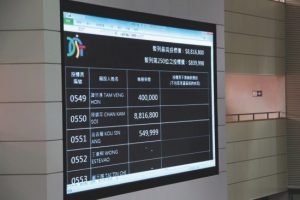 A bid  at the auction for 250 taxi operating licenses held by the Transport Bureau (DSAT) at the Macau Polytechnic Institute (IPM) sports pavilion, caused an immediate uproar in the room when the sum of MOP8,816,800 was added to the bidding panel.
The sum, tendered by Chan Kam Soi represents a cost of almost MOP92,000 a month for the total period of the license (8 years). According to TDM,  DSAT suspects that the unusual bid was the result of human error.
In total, the DSAT services received 755 bids, a number that represents over 3 times more than the number of licenses available at this time.
According to the information in the public tender, these licenses are non-transferrable, valid for an eight-year period and must be held by local residents. The minimum price for the biding was set at MOP200,000, a value that was far exceeded by all the bids.
The government opened this new public tender subsequent to the expiration of the previous taxi licenses and in response to a high public demand for taxi services that have ignited several disputes, leading also to the introduction of services such as Uber in the territory.
Last Thursday, while exiting the plenary meeting of the Traffic Advisory Board that took place at DSAT headquarters, the Secretary for Transport and Public Works, Raimundo do Rosário said that “this public tender [that is now ongoing] will be the last under the current regulation because, the Transport Bureau, the Legal Affairs Bureau and the police are currently preparing new regulations for the taxi industry. We hope that the next public tender next year, will be already under the new legislation.”
The secretary added that the revision of the “taxi regulation” will be ready either this month or, at the latest, next month.