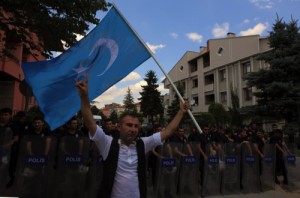 A man waves a Turkistan flag as Uighurs living in Turkey protest the killing of people allegedly killed by Chinese security in China’s far-western Xinjiang Uighur Autonomous Region five years ago, outside the Chinese embassy in Ankara

Chinese state media released a detailed casualty count yesterday for last week’s violence in the western province of Xinjiang, with 37 people and 59 attackers killed in the deadliest unrest in months that authorities blame on ethnic separatists.
The official Xinhua News Agency, which had previously said only dozens were killed, reported that attackers armed with knives and axes stormed a police station and government offices in Elixku township last Monday and then moved onto nearby Huangdi township. The agency said 13 people were injured and 215 attackers arrested, and that the dead civilians included 35 Han ethnic majority members and two Uighurs.
The earlier official account was immediately disputed by the U.S.-based Uyghur American Association, which represents the prevalent ethnic group in Xinjiang. It quoted local sources as saying police opened fire on people protesting Chinese security forces’ crackdown on Muslims during Ramadan, killing more than 20.
Neither version could be independently verified.
Xinhua’s report yesterday said the attackers had set up roadblocks, slashed at some passengers and forced others to join the attack. Xinhua named the mastermind behind the violence as Nuramat Sawut, whom the agency said is connected to the East Turkestan Islamic Movement. China designates the group as a terrorist organization.
Violence has erupted repeatedly over the past year in Xinjiang as Uighurs bristle under what they say is heavy-handed Chinese policies.
On Friday, police shot dead nine suspects and captured another in Hotan prefecture, two days after Jume Tahir, the imam of China’s largest mosque, was killed in Xinjiang, Xinhua reported. In May, attackers in SUVs plowed through a crowd while hurling explosives in the provincial capital of Urumqi, killing 45 people.
Rioting involving both Uighurs and Han Chinese in 2009 left nearly 200 people dead in the region. AP 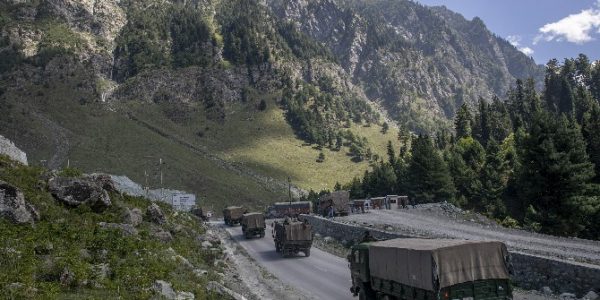