A look at key events in the 1989 protests 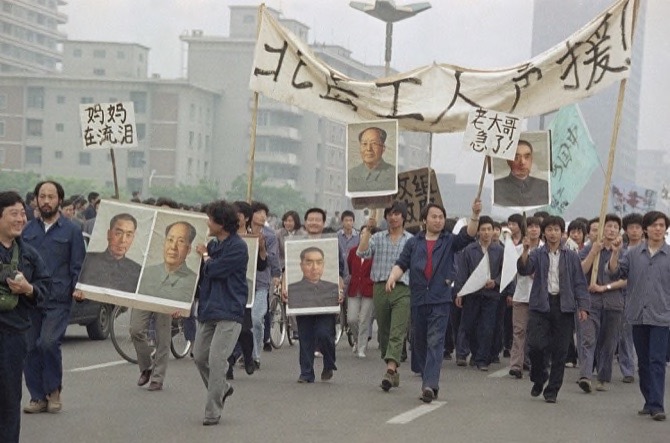 Over seven weeks in 1989, student-led pro- democracy protests centered on Beijing’s Tiananmen Square became China’s greatest political upheaval since the end of the Cultural Revolution more than a decade earlier. 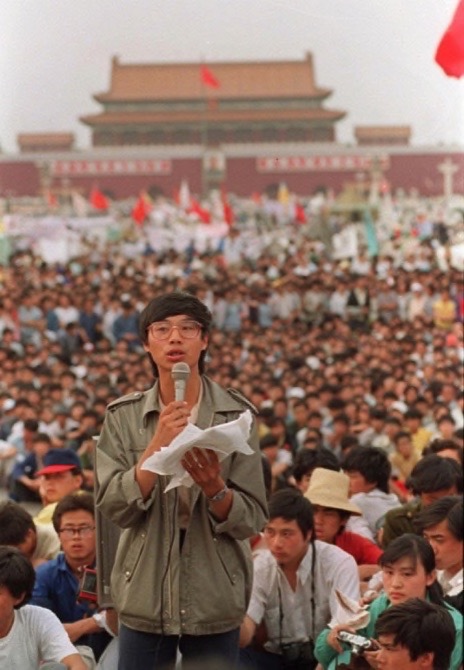 Corruption among the elite was a key complaint, but the protesters were also calling for a more open and fair society, one that would require the ruling Communist Party to relinquish control over many aspects of life, including education, employment and even the size of families.

Next week marks the 30th anniversary of the bloody crackdown that ended the protest. The government has never given a clear account of how many were killed and has squelched discussion of the events in the years since.

A timeline of the events that led to the military intervention on the night of June 3-4, 1989, and the aftermath:

A leading liberal voice in the ruling Communist Party, Hu Yaobang had been deposed as general secretary by paramount leader Deng Xiaoping in 1987. Deng held Hu responsible for campus demonstrations calling for political reforms. His death from a heart attack in 1989 attracted mourners to Tiananmen Square. They called for continuing his reformist legacy and opposing corruption, nepotism and a decline in living conditions. The number of protesters swelled into the thousands in the days afterward, and spread to cities and college campuses outside Beijing, deeply alarming Deng, Hu’s successor Zhao Ziyang, and other party leaders.

The protests had begun to wane after 10 days but were re-energized by an editorial read out on state television on April 25 and published in the official People’s Daily newspaper the next day. Titled “The Necessity for a Clear Stand Against Turmoil,” it described the protests as a “well-planned plot” to overturn Communist rule. The tone of the editorial raised the strong possibility that participants could be arrested and tried on national security charges. Following its publication, protests broke out in cities around China. The text appeared to closely follow the 84-year-old Deng’s views on the protests, as chronicled in The Tiananmen Papers, a 2001 book edited by American scholars Andrew Nathan and Perry Link and believed to be based on documents sourced from government archives.

Frustrated by government indifference to their demands and the potential consequences of the April editorial, student leaders launched a hunger strike to demand substantive dialogue with the nation’s leaders and recognition of their movement as patriotic and democratic. The strike drew attention from noted intellectuals including Dai Qing, who praised the students’ ideals, but called on them to have patience and to abandon Tiananmen Square temporarily to allow a groundbreaking visit by Soviet leader Mikhail Gorbachev to proceed smoothly. 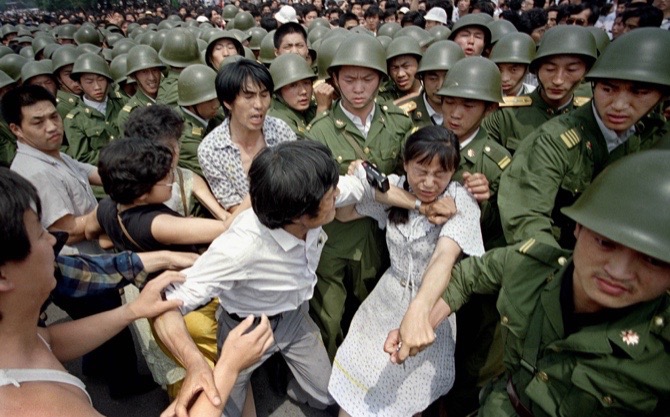 A young woman is caught between civilians and Chinese soldiers, who were trying to remove her from an assembly near the Great Hall of the People in Beijing on June 3 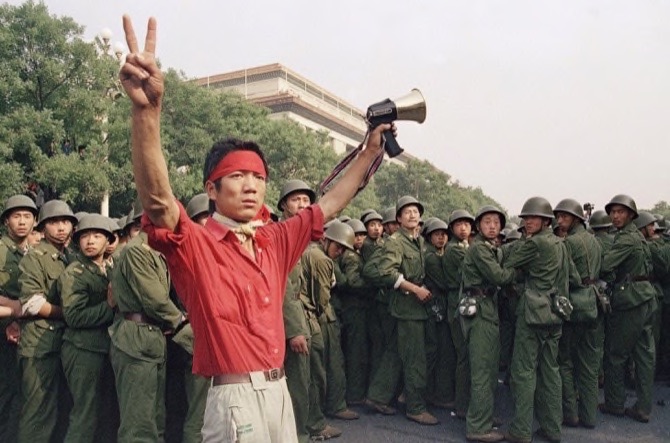 The students rejected the suggestion, and a formal welcoming ceremony for Gorbachev was canceled in what was seen as a huge loss of face for the government. On May 18, student leaders were finally granted a meeting with Premier Li Peng and other party officials, but the session was contentious and no commitment was given on meeting their two demands.

With the tone inside the Zhongnanhai leadership compound turning increasingly combative, Deng and other leaders met to agree on declaring martial law. Finding himself isolated and undermined, Zhao determined he could no longer back the party’s position and drafted a letter of resignation. With no sign of compromise from either the government or the students, Zhao visited the square to address the students at 4 a.m. on May 19, accompanied by Li Peng. With a grim-faced future premier Wen Jiabao standing behind him, Zhao told the students,” 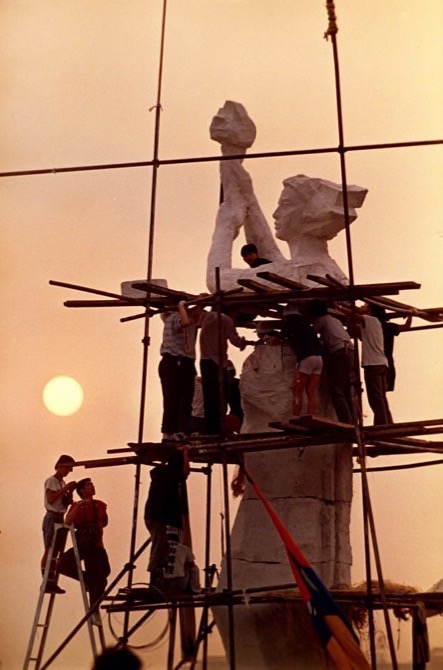 We have come too late.” He urged them to end their hunger strike and assured them that their concerns would be addressed eventually. Zhao then took sick leave and disappeared from public life, soon to be replaced by former Shanghai party head Jiang Zemin. Beijing citizens meanwhile defiantly stood up to block the first martial law troops and students began arriving in Beijing from across the country as the protests spread to an estimated 400 other cities.

Having decided that armed force was needed to end the protests and uphold Communist rule, the leadership ordered in the army, a move that would send in an estimated 180,000 troops and armed police. The commander of the 38th army, who was entrusted with the task, refused to follow orders and checked himself into a hospital. Soldiers faced resistance from Beijing residents, especially in the western neighborhoods of Muxidi and Xidan. Troops on the ground and in tanks and armored vehicles fired into crowds as they pushed toward the square through makeshift barricades. Trucks, buses and military vehicles were set on fire and some troops killed citizens as they vented their rage. As troops closed the cordon around Tiananmen Square, a cohort of student die-hards refused to leave until persuaded to by other leaders, including Taiwanese singer Hou Dejian. City hospitals filled up with the dead and wounded. Hundreds, possibly thousands, were believed killed in Beijing and other cities during the night and in the ensuing roundup of those accused of related crimes. There has never been an official accounting of the casualties.

The army’s crackdown was widely condemned in the West, as well as in Hong Kong, then a British colony, where supporters organized missions to bring those wanted by authorities to safety. On June 13, Beijing police issued a most-wanted notice for 21 student leaders, 14 of whom were arrested. No. 1 on the list was 20-year-old Wang Dan, who was subsequently given a four-year prison sentence but released early. By 1992, most of China’s overseas relationships had been restored and Deng used his remaining personal influence to relaunch economic reforms that ushered in a new era of growth while the party ruthlessly enforced its monopoly on political power. 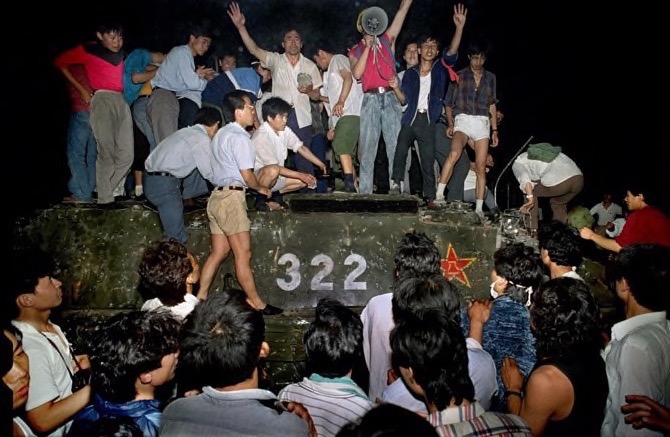 The protests, first labeled a “counterrevolutionary riot,” are now merely referred to as “political turmoil,” when they are referred to at all, as the party tries to suppress all memory of them having occurred. The government has never expressed regret over the killings and rejected all calls for an investigation, leaving the protests an open wound in Chinese history. Asked if he had any comment about the anniversary at a monthly briefing on Thursday, defense ministry spokesman Wu Qian said he didn’t agree with the use of the word “suppression” to describe the military action, but offered no alternative. “I think over the 30 years, what we have achieved in reform and opening up and development has already answered your question,” Qian said. AP