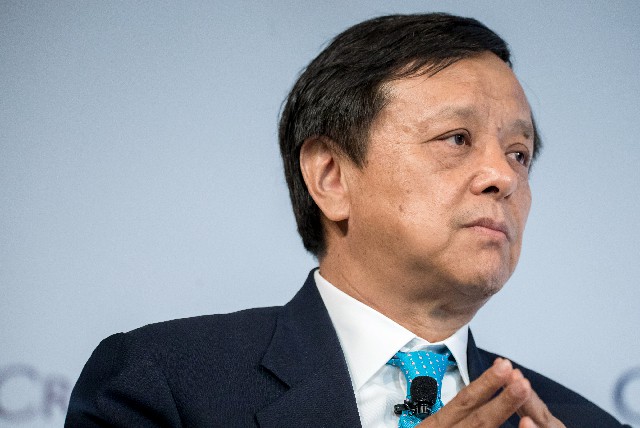 Charles Li isn’t taking “no” for an answer.
Rejected by London Stock Exchange Group Plc directors, the chief executive officer of Hong Kong’s bourse is ready to make his case for the 29.6 billion-pound ($37 billion) takeover directly to investors. LSE shareholders “should have the opportunity to analyze” the proposal in detail, according to a statement Friday by Hong Kong Exchanges & Clearing Ltd. Beyond the political, regulatory and commercial hurdles, HKEX is also demanding LSE walk away from its own $27 billion deal for data provider Refinitiv.
“The Hong Kong exchange is seeing London Stock Exchange holders over the next few weeks to walk through the benefits of their offer,” said Guy de Blonay, a fund manager at Jupiter Asset Management Ltd. in London. “That means going hostile is not out of the question.”
The dealmaking involves some of the world’s highest-profile financiers. Stephen Schwarzman’s Blackstone Group is on one side, as lead investor in Refinitiv; on the other, Ken Moelis’s firm is advising HKEX. The winner side will have to persuade the $320 billion Qatar Investment Authority, the sovereign wealth fund and the LSE’s biggest shareholder, which has so far declined to comment on the HKEX proposal.
Early Friday, LSE rejected HKEX’s offer, citing problems in “strategy, deliverability, form of consideration and value.”
“Your assertion that implementation of a transaction would be ‘swift and certain’ is simply not credible,” LSE said in its statement. “We see no merit in further engagement.”
The London exchange pointed to HKEX’s unusual relationship with its government as another sticking point.
“We are not a Chinese company,” Li asserted last week. He even claimed “we are not even a Hong Kong company,” referring to its international aspirations.
But LSE begs to differ. “There is no doubt that your unusual board structure and your relationship with the Hong Kong government will complicate matters,” it said.
The Chinese territory’s government holds 6% of HKEX’s stock and appoints 6 of the 13 board members. The city’s chief executive – a person appointed by Beijing – picks HKEX’s chairman.
LSE also has a problem with HKEX’s old-school business model. “The high geographic concentration and heavy exposure to market transaction volumes in your business would represent a significant backward step for LSEG strategically,” it said in the Friday statement.
HKEX responded by saying it’s still seeking negotiations with LSE’s board and hasn’t decided yet to take the hostile route of directly making a tender offer to LSE shareholders, a person with knowledge of the matter said.
In the meantime, HKEX has quietly begun its campaign on the ground, citing analysts’ criticism of the Refinitiv deal, according to people familiar with the matter. An Aug. 13 Commerzbank AG analyst report pointed to sluggish growth at Refinitiv and said a substantial part of its revenue base is in “structural decline.”
For its part, the LSE has pinned its future on a world dominated by data with its bid for Refinitiv, the business that used to be Thomson Reuters Corp.’s financial and risk unit. Bloomberg LP, the parent of Bloomberg News, competes with Refinitiv to provide financial news, data and information.
Speaking to reporters on Wednesday, Li touted the benefits of enabling two-way capital flows between East and West, “bringing together significant financial centers of Asia and Europe” and facilitating an 18-hour trading day.
The business arguments may prove moot amid rising global political tensions. Protests in Hong Kong and U.S. President Donald Trump’s trade war with China could make the sale of the LSE to China-backed interests too fraught.
In London, U.K. Business Secretary Andrea Leadsom said on Wednesday the U.K. would “look very carefully” at anything with “security implications.” The British political class may also be unwilling to court controversy given the drama over delivering Brexit. MDT/Bloomberg