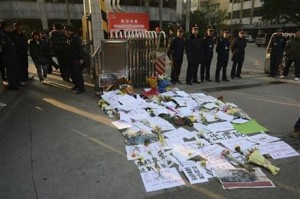 Security guards stand near protest banners and flowers laid outside the headquarters of the Southern Weekly newspaper in Guangzhou, Monday, Jan. 7, 2013

A scheduled trial for a Chinese human rights activist Yang Maodong may not proceed today after his lawyers said they would not attend the court proceedings because authorities did not let them copy court files crucial to the case.
Lawyer Chen Guangwu said yesterday that he and colleague Zhang Xuezhong are not prepared to mount an effective defense for Yang. The district court in the southern city of Guangzhou has banned them from copying docket files including videos and photos related to Yang’s arrest on suspicion of assembling crowds to disrupt public order, Chen said.
“If we cannot review the files properly, how can we be prepared for the trial?” Chen said, adding Yang had requested in writing that his lawyers not show up for the trial. “It’s a severe mistake for the court to not allow us to duplicate files,” he said.
The court did not provide a reason for the ban, Chen said. Calls to the court were not answered yesterday.
Yang is better known by his pen name Guo Feixiong and was detained in August 2013 after he organized public rallies calling for press freedom outside a media company that complained of government censorship.
Yang, 48, is a veteran activist pushing for greater political freedom and more civic engagement in China. He was sentenced to five years in jail in 2006 over his activism.
In early 2013, he helped organize demonstrations and gave a speech in support of the editorial staff of the newspaper Southern Weekly in Guangzhou after the journalists said that a new year’s message that called for rule by the constitution got altered because of censorship.
The authorities have accused Yang of disturbing public order, but his supporters say the rallies were orderly. They also note the gatherings were held under the close watch of local police, who would have been negligent if they had let the rallies get unruly.
Yang kept his silence in early interrogations but made some explanations later, Chen said.
Yang has never admitted to any guilt, the lawyers said. AP