The famous HK-based actress Lynn Xiong is the new “Star Ambassador” of the Hollywood-­inspired resort, Studio City.
Ms Xiong made her first appearance as “Star Ambassador” yesterday while visiting the resort. She had the opportunity to participate in the final act of the “The House of Magic” show, contributing in the on-stage “pop-up” of a replica of a famous supercar.
The “teleporting” act brought to an end the three-stage show, which included the famous illusionist Xiong and entertainers like Danny Cole, Kyle Knight & Mistie, Luis de Matos and Michael Turco, the last of whom is the man in charge of the main stage of “The House of Magic” by Franz Harary until the end of this month. 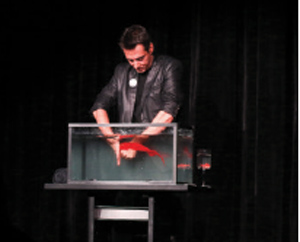 Visiting the resort, Lynn said, “As a professional actress, I dedicate myself to the art or movie-making, but it never dawned on me that there could be an integrated resort [like this] right here in Asia. It is marvelous and seemingly real, like a Hollywood movie scene. It was a very exciting surprise.”
Lynn seemed especially impressed with “The House of Magic” and with the fact that she could be a part of it. She said she was “very nervous through the whole act.” However, she also claimed that she felt “honored” to have participated in the show and that she had invested some “extra care” into the rehearsal, hoping that all would run perfectly.
The tour ended with a trip in the “Golden Reel,” the number “8” shaped Ferris wheel that is one of the iconic features of Studio City. This is a place that the actress said she had “read so much about” and that she is “planning to visit with the family” at a later date. RM