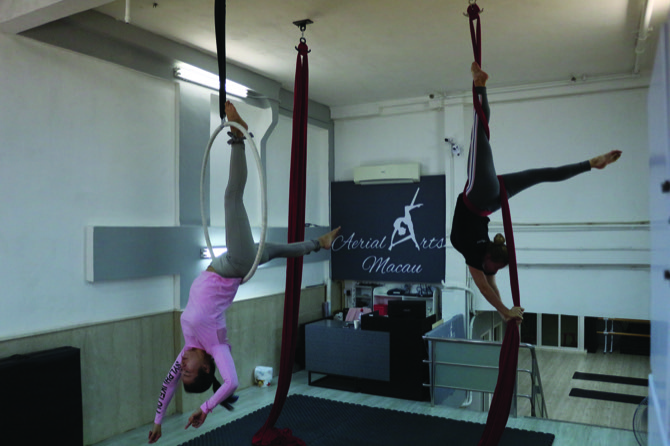 A group of aerial and yoga practitioners recently opened a studio downtown in a bid to boost its community in the region.

Zoe de Vilhena, who arrived in the SAR in 2007 and is now one of the co-owners of Aerial Arts Macau, noticed that there were neither aerial silk dancers nor classes that taught such technique, thus she started her own private classes.

De Vilhena started sharing techniques with dancers who had also moved to Macau to take part in a show at a gaming operator.

Aerial silk is a type of performance in which the artist performs aerial acrobatics while hanging from a piece of fabric.

The fabric may be hung as two pieces, or a single piece, folded to make a loop.

However, for de Vilhena, it was challenging to raise awareness of the modern dance in the region, adding that since it requires physical strength and confidence, some would look at it as a difficult type of dance.

“So it’s really about helping people have confidence and [to] try it in a safe and secure environment,” said de Vilhena.

According to the co-owner, they had been teaching private classes in a rented space at the Macau Design Center to accommodate those interested, until they found a three-floor commercial space that was feasible for such activities.

Due to licensing difficulties, de Vilhena admitted that it was difficult to find a commercial space in Macau, citing rent prices.

In the region, such activities should only be conducted in commercial spaces, and not in industrial buildings.

Located at Rua Central, the studio is considering working with the government for local residents in order to be able to take advantage of their Continuing Education Subsidy Scheme.

“We can incorporate some costs with that but we need to see how things go first because it’s new, we’re not used to paying rents; and just really trying to out the community a lot more and do local shows,” she added.

The studio also works with the Aerial Arts Association, collaborating with them to organize shows and festivals for the government and private enterprises.

Currently, the group has some 100 members, 30 of which are new following its newly opened studio.

Most members are Chinese locals, Macanese, Portuguese and expats who are professional dancers or aerialists from shows who come for training and personal practice.

“It’s just about time, recognition and people trying new things. In England and in Europe, you have a lot of spaces like this, a lot of people teaching. Here it’s more difficult because you have a lot of restrictions in terms of what you can do,” she said, citing licensing regulations.

“It’s the hope that after I grow, we’ll be able to do more local shows for the people and also for exercise,” de Vilhena added.