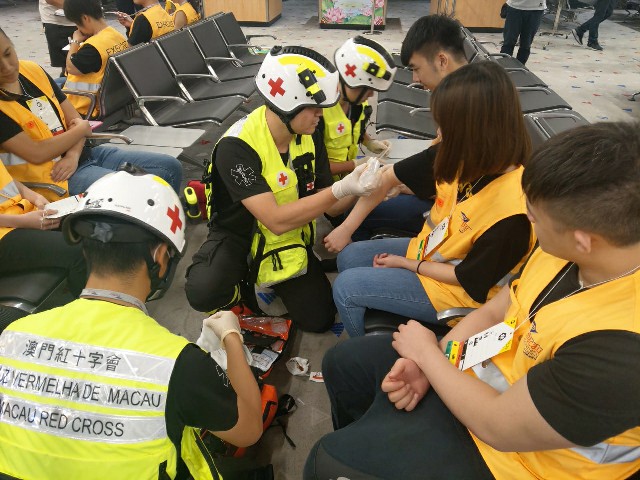 Macau International Airport conducted an emergency drill in the early hours of yesterday, simulating an accident in which an aircraft veered off the runway and crashed into the sea.
The airport emergency plan was activated to attend the accident and, according to a statement from the Civil Aviation Authority, the exercise ran smoothly and achieved its goal.
The simulation tested safety and emergency procedures for the case of an accident during which the fuselage was broken into several sections and were floating some distance from the runway. The simulated aircraft was carrying 80 passengers and six cabin crew members. The simulated accident resulted in some passengers being trapped inside one section of the fuselage while other passengers were thrown into the water.
The airport emergency operations center was activated and the fire services and the rescue team arrived on location to provide search and rescue services; it was confirmed that there were 10 deceased passengers and 45 injured passengers; those injured requiring medical treatment were sent to the hospital; a family reception area and a counseling center were also established in the passenger terminal to provide inquiry and counseling services to the uninjured and the family members of those injured and the deceased.
The drill started at 3 a.m. and lasted for three hours. All participating entities were able to act following the airport emergency plan, as well as the contingency plans.
The statement notes that a total of 350 participants were involved in the drill including 14 public and private entities — the airport management, security forces, and several other bureaus and companies that provided assistance or participated as observers. RM