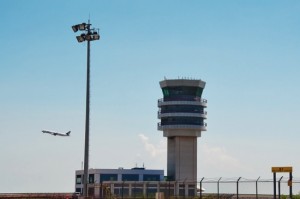 Macau International Airport (MIA) is expecting to see a five percent increase in passenger movements this year, according to its marketing director, Eric Fong Hio Kin.
Fong made the remarks on the sidelines of an awards ceremony for a micro-film competition in celebration of the airport’s 20th anniversary. He said that the terminal has estimated catering for approximately 5.7 million passengers this year, signaling an approximate five percent increase from the year before. He added that the number of aircraft movements was expected to see a six percent rise as well.
Fong also said that South Korea’s Jeju Air was slated to commence operating flights to Macau on Monday.
Meanwhile, the winners of the micro-film competition, co-organized by the airport and public broadcaster TDM, received their prizes during the awards ceremony held at the airport. The winner received MOP30,000, while the recipients of the second and third prizes were awarded  MOP20,000 and MOP10,000 respectively.
Speaking to reporters after the ceremony, Wong Seng Iun, who won the competition, said he was able to learn a lot about filmmaking during the competition. He added that he would like to continue making films in Macau but lamented the absence of a local market for filmmakers.
The airport, whose main shareholder is the government, recorded 5.48 million passengers last year. In 1996 – its first full year of operation – it saw 1.3 million passengers.
MDT/Macauhub