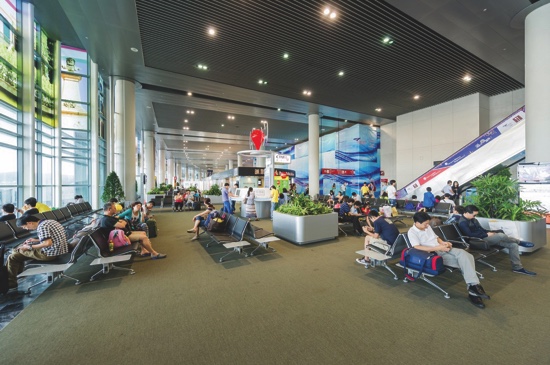 The Macau International Airport (MIA) held a formal celebration ceremony by the side of the airstrip yesterday to commemorate the new annual record of 5.5 million passengers.
The ceremony saw live performances for passengers, as well as the distribution of souvenirs in honor of the airport’s 20th anniversary.
The executive director of the Macau International Airport Company (CAM), Leong Sio Pui, credited the introduction of new routes – particularly across Southeast Asia and North Asia – and a number of new airlines opening routes to Macau for the increase.
The infrastructure, which recently announced plans to invest in facilities for long-haul flights, managed to attract seven new airlines offering eight new routes to Macau in 2015.  The new routes connect Macau with mainland destinations Haikou and Wanzhou, as well as Vietnam’s Ho Chi Minh City and Haiphong, and 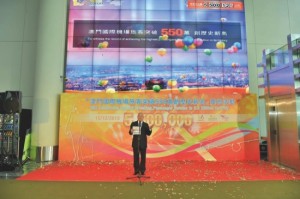 Phnom Penh in Cambodia. Routes were also opened to the Maldives, Palau and Thailand.
In addition, 2015 saw investment from North Asian airlines looking to open or expand flight services to Macau; notably the South Korean low-cost carrier T’Way Airlines which recently started operating five flights per week connecting Macau to Seoul’s Incheon International Airport.
MIA passenger traffic, which stands at 5.5 million to the middle of December, is up 5.5 percent compared with last year, according to information obtained from the company. This represents a record high for the airport.
The approach of Christmas and the New Year season is expected to provide additional good news for the airport and dependent business entities.
Executive director Leong confirmed at the ceremony that the company expects the new routes will drive airport passenger traffic to 5.7 million by the end of 2015. As the Times reported earlier this month, this figure had been previously announced by MIA. Staff reporter

The Macau International Airport Company (CAM) held its Extraordinary General Assembly yesterday to vote in the future senior corporate members of the company. A list of the 2016 to 2018 corporate figures was unanimously agreed upon during the course of the meeting. The company also revealed its strategic target for next year is to outclass its rivals in terms of corporate excellence, using a mantra of going “beyond the competitors and showing executive ability.” The company said that with the confirmation of management personnel, all staff will be more confident in the face of change and challenges in the future.