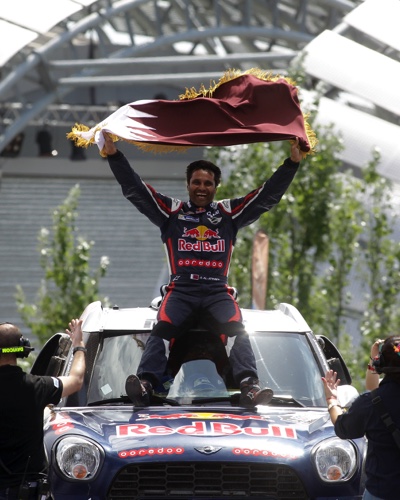 Nasser Al-Attiyah cruised to his second Dakar Rally victory on Saturday, completing a race he dominated from the first of 13 stages.
Having won rallies in his Qatar homeland and Morocco with French co-driver Mathieu Baumel, Al-Attiyah used his mental and physical readiness to turn the world’s toughest rally into a one-car race from the ninth stage on Tuesday, leaving the Atacama Desert inland to Calama, Chile.
On that day, Al-Attiyah more than doubled his lead to 28 minutes as his nearest rivals, 2009 champion Giniel de Villiers of South Africa, made a navigation mistake, and newcomer Yazeed Al Rajhi of Saudi Arabia, drove more than 200 kilometers, nearly half the stage, without brakes.
Al Rajhi dropped out the next day, while de Villiers finished second overall, more than 35 minutes behind Al-Attiyah. Krzysztof Holowczyc of Poland earned third, more than 1 1/2 hours back.
Al-Attiyah won the Dakar in 2011 in his seventh attempt and, after two aborts, was third last year.
“I’m delighted I’ve won,” he said. “It’s a really special moment for me. It’s fantastic because we’ve dominated the race from the beginning and were able to control the rally throughout.”
Asked what to expect next year, he replied: “Just continue to win more.”
He won the first stage out of Buenos Aires on Jan. 4, only to lose it when he was penalized two minutes for speeding on a link. As he won five stages through Argentina, Bolivia and Chile, he watched his rivals fall away. Defending champion and Mini teammate Nani Roma suffered a mechanical problem just three kilometers in, lost hours, and lasted until the 10th stage. Stephane Peterhansel, the five-time car winner, lost hours on the second stage; 2010 champ Carlos Sainz went out in the fifth.
Marc Coma of Spain won a much more competitive bike race, also taking control like Al-Attiyah, on Tuesday when fellow front-runner Joan Barreda’s bike was damaged.
Coma returned to Buenos Aires nearly 17 minutes ahead of second-place Paulo Goncalves of Portugal. Toby Price of Australia was third on debut.
Coma’s fifth bike title tied him with Frenchmen Cyril Despres and Cyril Neveu, one shy of the bike record held by Peterhansel.
Despres, with whom Coma has tussled for the bike title for the last decade, swapped to a car this year and finished 34th, 15 1/2 hours off the pace. AP