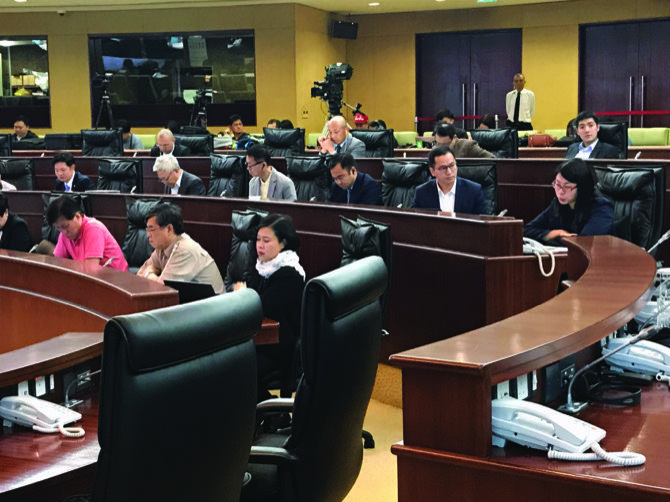 The Secretary for Economy and Finance, Lionel Leong, said yesterday that the government is working on amendments to the relevant laws to establish heavier fines and a recidivism penalty for illegal work activities undertaken by non-resident workers (TNR).

The information came through Leong’s statements at the plenary session of the Legislative Assembly (AL), which was solely scheduled to debate the matter after a proposal by the lawmaker Ella Lei.

In the justification of the debate, lawmaker Lei highlighted the case that motivated the proposal, which occurred in early March this year when a 22-year-old university student died in a traffic accident involving an “illegal driver.” The man had been hired by a company to perform work that did not include driving.

Continuing to call for heavier fines and penalties for illegal work, Lei noted that the existing law “is obsolete and does not produce the needed deterrent effects,” recalling that the large majority of the cases “are only treated as administrative offenses, punished with a fine of just a few thousand patacas.”

Aside from fines being low and un suitable as deterrents, the lawmaker also urged the government to explain the very significant drop in the number of cases in which additional penalties had been applied compared to a couple of years ago.

In her speech, Lei mentioned that in 2011, additional penalties (including suspended quotas for imported manpower) had been applied in 93% of cases of illegal work, compared to only 2% last year, leading the lawmaker to state, “The rigorous application of the measures [established by the law] is just a slogan from the government.”

In the debate that followed, lawmaker Leong Sun Iok also addressed the plenary and government saying, “The scenario of illegal work is very serious at the moment and [the current status] disrupts all the job market locally and contributes to many work-related accidents.” He further added, “I also don’t understand the lack of commitment from the government in addressing this problem. We can even see by statistics that from 2017 to 2018 there was even a reduction in the number of inspections.”

According to Leong Sun Iok, the average number of cases of illegal work found in Macau is currently one per workplace.

In conclusion, he asked, “Why are we slacking on this problem?”

Secretary Leong acknowledged the problem inn his reply and accepted the suggestions, justifying the issue with reference to the fact that the law has not been updated for the past nine years.
“The law has been in force for nine years and I recognize that there is room for improvement, namely in the aggravation of the fines and additional penalties,” Leong said. He further stated, “The DSAL [Labour Affairs Bureau] has been conducting studies that aim to review the current regime. There is already a calendar for that work, including the situations raised by the lawmakers […] The aggravation of additional sanctions is a topic that we are submitting to the Legal Affairs Bureau for examination, as it involves the penal code.”

In response to lawmaker Sulu Sou calling for a more precise date for the final bill, and following Secretary Leong’s reply that a calendar of legal amendments already exists, DSAL director Wong Chi Hong said, “We hope that by the third quarter of 2019 we can conclude the work and have a public consultation, as well as hear the opinion of the CPCS [Standing Committee for the Coordination of Social Affairs].”

Sou was also interested in knowing exactly what conclusions were reached by the DSAL investigation regarding the case of the student killed in a traffic accident, since the department had said that it had concluded investigations but there has been no official disclosure of the outcome.

Wong replied, “The DSAL concluded the investigation on the case and the results show that there was an infraction of the law regarding the incident. […] There were two non-resident workers involved and the DSAL applied a fine in the amount of MOP20,000 to the company, as well as an additional sanction that suspended the company from hiring TNRs for 2 years. I can also add that the fine has been paid already.” 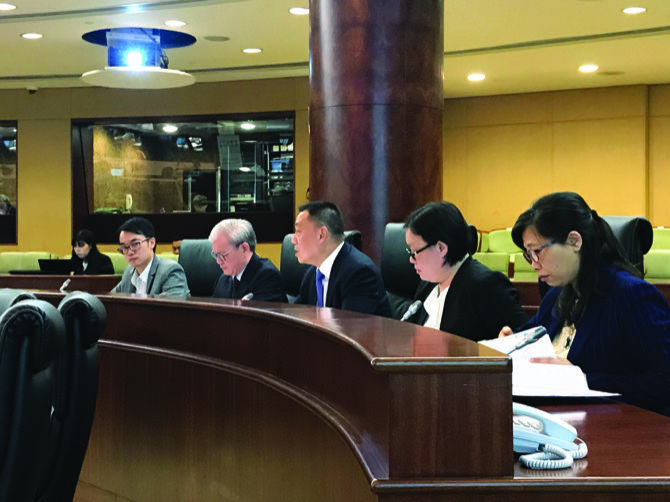 The DSAL director’s reply to Sou sparked a reaction from lawmaker Lei, who again called for a reply from the government on why the penalties enforced by the government are now “so light” compared to previous years, even in cases with very serious consequences like the aforementioned traffic death.

Secretary Lionel Leong replied that it is not possible to “define a ratio for the sanctions,” and it is a matter “decided case-by- case” according to a series of criteria that then the deputy director of the DSAL, Ng Wai Han, explained in more detail.

The main criteria are “the severity of the case and level of responsibility of the agent [company], and the number of people involved and whether or not there was recidivism. The damages and consequences [of the case] are also taken into account,” Ng clarified, failing to mention the frequency at which such additional sanctions are applied once again, and leading to the intervention of lawmaker Au Kam San who urged for a reply on the matter.

At the insistence of the lawmakers, the secretary finally replied, saying that the DSAL had not prepared a reply on such figures and that was why they were not addressing the topic.

Facing questions on the matter from several lawmakers, the Secretary for Economy and Finance admitted that the DSAL has also been experiencing difficulties with interdepartmental cooperation and was undertaking an investigation, a fact which restricted and restrained the application of sanctions.

In order to investigate the cases, “we need to cooperate with other services in order to tackle these matters. This sometimes causes difficulties,” he said. Deputy Director Ng noted that the DSAL is undertaking joint operations with the Public Security Police Force and Macao Government Tourism Office, including roadblock operations.

Nevertheless, she also acknowledged difficulties in the collection of proof, “namely from the construction sites in which there are usually many sub-contractors and it’s difficult to ascertain who the workers are working for.”

HOTEL, F&B SECTORS WITH MOST CASES

Replying to a question from lawmaker Agnes Lam, the deputy director of the DSAL noted that, according to the bureau’s statistics and records, in 2016 and 2017 the sectors responsible for the highest number of cases of illegal work were from the hotel and food and beverage industries. She did not cite exact figures but stated that they accounted for the large majority.

Her observation triggered responses from other lawmakers who noted that the reduction in the number of inspections, combined with the lack of effective legal deterrents, were contributing to the problem becoming more widespread. Whereas in the past the issue was self-contained within the construction sector, it has spread to other areas these days, including the main pillars of local economy.